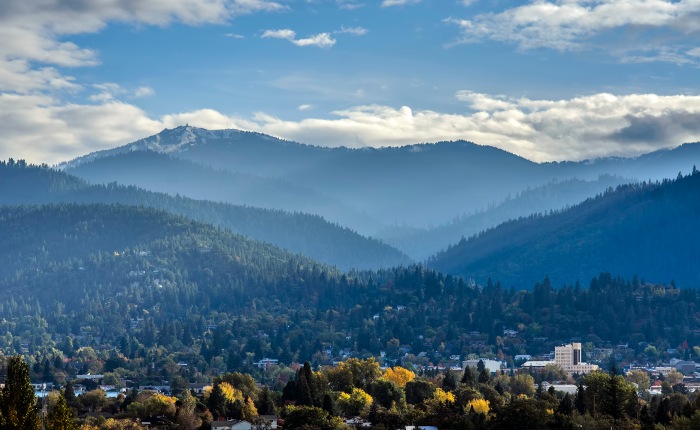 The temperature has been dropping over the past few days; rumors of real snow abound, and travel plans through the mountain passes have to include snow tires or chains.  I live in the Rogue Valley in Southern Oregon; the hills on both sides of the valley are forested, green until November, then flocked with snow until May.  The higher peaks don’t melt until the middle of July.

I walked across a parking lot yesterday morning, forgot about the errands I had planned, and stood looking to the south and north, grateful again to live each day against a spectacular backdrop.  People who grew up here describe the climate as “pear friendly”, the growing season is long, and sunshine and water arrive as the trees have need of them.  Summer days are long and occasionally very hot up here, but each of the seasons brings dramatic lightscapes and plenty of interesting weather.

My days, for the most part, are spent in Ashland, a small city of about twenty-five thousand people.  Ashland is the home of the Oregon Shakespeare Festival, an ambitious repertory theater company which produces plays in three separate theaters  from March until November.  In the course of a decade, the entire canon of Shakespeare’s work hits the stages, but Broadway musicals, original work commissioned by the Festival, Restoration comedies, French farce, and reimagined classical works will all have a place.  Southern Oregon University is here as well, and coffee shops, restaurants, bookstores, horse farms, and orchards.  People move here, mostly from California, but from other parts of the West as well.  Locals put up with us; we admire the locals.

I’m lucky to be here, but I don’t live in Ashland.  I live in Phoenix, a village belonging to greater Medford.  We have a small home, fenced acreage, no near neighbors, and long views in every direction.  Home prices in Ashland are higher, and nobody I know drives to Phoenix for the restaurants or coffee shops, but I love the play of light in our part of the valley, and my fifteen minute drive to the south end of Ashland takes me by the loveliest panorama of mountains, a view Ashlanders don’t ordinarily see.

This pattern of living near but not in extraordinarily advantaged places began in childhood.  I grew up in Woodville, Connecticut, a community so small it can’t properly be called a village, much less a town.  As a non-census community, there has never been an estimate of population, but my guess is that the thirty or so households probably hold about a hundred people.  Woodville is one of five communities within the town of Washington, Connecticut, a large township with low population density. Today the population of the entire township (Washington Depot, Washington Green, New Preston, Marbledale, and Woodville) is about three thousand, five hundred, up about a thousand from what it was when I was in school.  Washington is one of the two or three loveliest towns in Connecticut; stately Georgian and Greek Revival houses flank the Green, and manicured estates follow the sweep of the rolling Litchfield Hills, the last extension of the southern Berkshire mountains.

Woodville is far from manicured; the truck route from Danbury to Torrington ran through Woodville, but there are few distinctive features to separate the stretch through Woodville from similarly undeveloped wooded country anywhere north of New Milford and south of Litchfield.  Long gone are The Armory (guns and knives) and Grandpa Snazzy’s Cabin, a tiny store that sold candy, sodas, and Hostess pastries, and which held the county’s only pinball machines.  My brother’s pottery (Wolff Pottery) was a landmark in later years, but in my youth, the building was still a mule barn.

Picture postcard Washington inspired the Gilmore Girls’ Star Hollow, and the famed Mayflower Inn has long welcomed guests from around the world.  The “commercial” area of  the town, known as Washington Depot consisted of the Hickory Stick Bookstore and Park’s Drugstore, a hardware store (The Washington Supply), a small market, the post office, the town hall, an art gallery, and a bank.  Marbledale had a grocery store, New Preston a package store, a grocery, a pharmacy, and a post office.  The town library, a smaller Park’s drugstore, the Congregational and Episcopal churches, and the Gunnery, a boarding school were on the Green.

I’m pretty sure the folks who live on the Green or on one of the expansive horse properties have no idea that there is a Woodville; not many Georgian or Greek Revival homes on the truck route.  On the other hand, main road aside, I was surrounded by pine forest and could easily walk to an unpaved road that followed the Shepaug River, branching off to meet Sabaday Lane, as horsey a lane as one can imagine and one that leads eventually to the top of Washington Green.  In the winter, when a cold rain was followed by a sudden drop in temperature, I could skate on that dirt road; in the summer, I could prop my bike at the trunk of a pine tree and walk down the bank into one of the pools made as the river dropped into a bend.

Years later, my wife and I were married in that post card church on the Green and celebrated by taking our tiny wedding party, including our dog, to the Mayflower Inn.  I have been tempted at times to feel sorry for myself as an outsider, far out at the fringe of gracious living, but the truth is that I have been fortunate from the start, lucky to find myself in extraordinary settings, delighting in the gifts that each season has to offer.

I spent much of this morning in the pasture with our four dogs.  Snow has been falling since before dawn; the dogs’ tracks fill quickly.  Despite the onset of winter, Blackberry tendrils have been throwing themselves far from the fences; today they are covered with snow, weighed down, far less likely to spring at me as I lop off new runners with a hedge trimmer large enough to fit a Norse god’s fists.  When the snows melt, I’ll gather up the piles of blackberry bramble and toss them on the burn pile.  For now, they sit snow covered, white mounds marking the fence line.