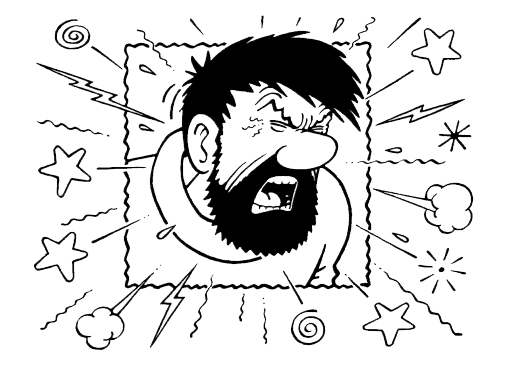 I’m a modern man, quasi-modern anyway, and yet, despite having read widely and having watched any number of foul-mouthed stand-up comedians and virtually everything Quentin Tarantino has written or directed, I am still a little bit shocked when I hear what was once called “blue” language or swearing – obscenities, anatomically graphic descriptions of perfectly normal bodily functions, and blasphemy.

Don’t get me wrong, I’m not necessarily critical of that kind of language; in many cases, it hardly registers (another issue for another day), and when used judiciously (another issue) often very effective.  What interests me is not that you swear or Tarantino’s characters swear, or any public figure swears, or even my own kids swear, but that I still feel embarrassed when I use these sorts of words outside of very close friendships.  If I’ve whacked myself with a hammer, a common outcome of my efforts at home improvement, I try to say “Shazbat!!” or “Blast!”, or, most laughably, “Son of a Sea Cook”, fail most of the time, but regret that failure almost as much as I regret whacking myself with a hammer.  It’s almost impossible to quote contemporary speech without encountering  a slew of words once considered offensive, so I find myself dancing around the danger zones, hoping the person with whom I’m speaking will get the gist of the reference without my having to dive into the deep end of the pool.  Those “So and So’s”!

I wasn’t raised with missionaries; I’m not sure where these taboos were hatched. I do remember the concern my mother and grandmother had about my use of what they called vulgarisms.  They didn’t swear (my mother used “Ships!”when aggrieved), and I didn’t swear much, certainly not in front of them, but I did use terms commonly tossed around at school and in most settings other than my grandmother’s house.  I’m not sure when I became aware of the dissonance between the language “out there”, language my grandmother would have called vulgar and proper English usage, but correction came early and often.

Vulgar.  It’s not a word with much currency these days; we’ve sailed into a nether world of routine vulgarity, pretty much found in ordinary speech, G rated movies, and mainstream television.  I’m not talking about those words that are consigned to cable television, words which bring the R rating.  I’m talking about words and phrases which in my youth were never used in polite company such as “damn”, “hell”, “crap”, “bastard”, “sucks”, “piss”, “pissed off”, “bitch”, “balls”, “effing”, “fricking”, “dick”, “whore”. I’ve used them all, probably in a single sentence, and yet, I find myself blushing as I put these words in print.

Exasperated?  Fed up?  Ok, then you might say something like “Darn!”  “Shoot!”, “Fiddlesticks!”, “Shucks!”  Even then, on thin ice.  As I look back (as it were), I’m amused at the number of words we found to describe the human posterior, all of which would then have been considered vulgar – behind, rear, rear end, tail, bottom, can, fanny, butt, buttocks, caboose, buns, heinie (probably from hindquarter?), backside, derriere, rump, seat, haunches, keister, patootie.  People made jokes about donkeys knowing that the word ass could refer to the mammal, but I recall being heartily amused when someone in 5th grade called me a “half-ass”; the image was just too absurd.

At which point, the same parents would respond, “Hay is for horses”, almost certainly ensuring that further efforts at communication were useless.

This was an era in which children informed their parents that they had to do Number One or Number Two and so were led to the potty.  Yikes!

My life changed forever when my parents pulled me from the comfy public school in my home town to send me to the fancy private boarding school (in my home town), a shift that I believe was the result of my having become too vulgar for their taste.  Not only had I learned to spit, and I mean spit really well, but I had become quite comfortable using the word, Ain’t.  I think that was the straw that broke the camel’s hindquarters.

Elvis Presley was an inescapable force of nature in my formative years, and his locutions struck me as pretty cool, cool also being a word my parents could not abide.  “You ain’t never caught a rabbit and you ain’t no friend of mine.”  Double negatives aside, ain’t never and ain’t no tugged at my folks’ sense of propriety, and, looking back at it, probably put a dent in the image that they had of themselves as highly educated, culturally sophisticated, and thoroughly refined.  Vulgar, as I see it now, was a class thing.  Ain’t no doubt.

It worked, of course.  I stopped saying Ain’t.  I did, however, begin to hear the kind of schoolboy humor that warped my understanding of the relationship between men and women and taught me a vocabulary that would have made my grandmother turn purple.  When I think of what passed for humor in the darkened dormitory (no doors, beds separated by curtains), I wonder how any of us managed to negotiate the world with any semblance of grace.

Without dropping into yet another paen to the legendary heroes of my youth, let me simply say that I took great pleasure in listening to baseball games broadcast after the lights were killed in the dormitory.  Headphones would have been a fantastic, futuristic invention , so I had to pull my radio under my blankets and lie, sweating, with my ear to the speaker.  The voice I heard was that of Red Barber, “The Ol’ Redhead”, raised in Mississippi, possibly the most conscientiously neutral and deliberate of broadcasters, who, in a sweetly thick southern drawl, expressed strong feelings with exclamations such as “Oh, Doctor, that ball is gone!”.  When a team was doing well, he would say, “They’re tearing up the pea patch!”

Whats the point of introducing Red Barber?  Years later, I hear Barber explain that he never swore because he was concerned that in a moment of passion, he might let loose with an obscenity.  As a teacher, I understood completely.  Did I slip?  Probably, but I can’t remember a truly egregious gaffe, in part because I take words seriously and spent a fair amount of time correcting the can and may, his and their, and not simply correcting but responding unhappily to sucks and pissed.

I don’t think of myself as a fossil or dinosaur, but when it comes to contemporary usage, I’m positively Paleozoic.  So, let the vulgarities fly; fiddlesticks, I say, Oh, Doctor, what the heck, not a blessed thing I can do about it.