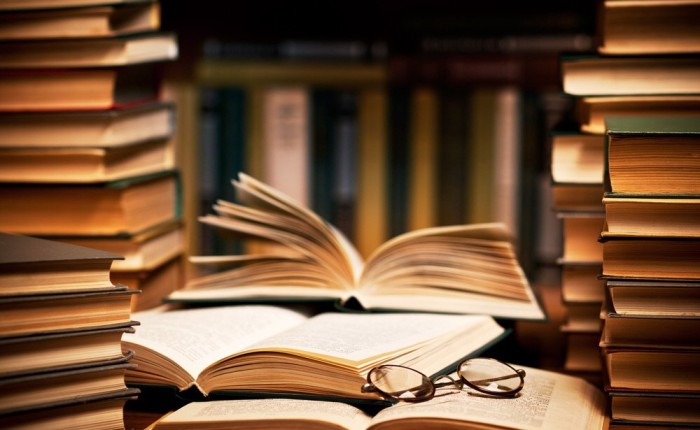 I believe in love at first sight, sense of humor in dogs, and the rare experience of finding a true book friend. Maybe not so rare, as I have met three or four people whose reading world mapped roughly the same region as mine and whose impulse it was to bring an author or book into the conversation within the first five minutes of our acquaintance. Such folks do exist, often in the least likely setting. Consider my agitated fictional friend Holden Caulfield, self-proclaimed illiterate, who got a huge kick out of a novel such as Hardy’s Tess of the d’Urbervilles and wished authors like Ring Lardner were close friends so that he could call them on the phone when he felt like it. I’m pretty certain that Holden’s creator, professionally reclusive J.D. Salinger, would not have answered a phone call from a wanna-be-book-friend, but it’s the impulse that counts.

An absolutist would argue that there are two kinds of people in the world – those for whom books must be gushed about and recommended and those for whom many other interests compete for brain space. Let’s leave that observation behind; we’ve got enough absolutism and division for one century. The point is, when you meet a book friend, you KNOW.

Of course, engaging with an ambitious reader can be exhausting. So many books, so little time. And, over the years, some peculiarities of preference become more clear, challenging the befriended to open a book they would not otherwise have chosen. Some books are opened and read to the end; others lie gathering dust on a bedside table. Still, no harm in gushing.

I have met only a few prominent authors along the way, and though I’m inclined to think that none would welcome a phone call, I am grateful to have heard their voices. I met Louise Erdrich once; I’ve never made a phone call although I admire her greatly and have been tempted to walk into her Minneapolis bookshop, Birchbark Books, on the off chance that she might drop in. Erdrich and Michael Dorris spoke at a workshop I attended in 1991, before I had read their work. I was thrown off a bit by the workshop leader, an Episcopal priest, who introduced them as American Indian parents of a troubled son. Dorris had just written The Broken Cord, a description of the challenges he and Erdrich faced in raising a son born with fetal alcohol syndrome. It would turn out that Dorris and Erdrich had a number of other significant challenges. Their storied marriage and literary collaboration ended in divorce; Dorris took his own life in 1997. Erdrich has become one of the authors whose books fill my shelves. In the years since Dorris’ death, she wrote Love Medicine, one of the novels I gush about, and another eighteen novels, short fiction, poetry, and children’s books – 29 books in all, including her most recent, The Sentence.

That’s where today’s musing really begins. I’ve read all but two of her novels, loved some entirely, loved some less. She captivates me in those moments when she, the author, the narrator, and the otherworldly mingle for a moment, when collective voices and soul flash brightly then retreat to ordinary time and space. Reviewers have described Erdrich as a writer who “flirts” with magical realism, an assessment I find inadequate. Her narrative style has also been called fragmented, unrealistic, and particular to her Ojibwe heritage. Again, inadequate. The legacy of colonialism and subversion of Native identity informs all of her work, of course, but it is Erdrich’s use of language that is of greatest interest this morning as I put down The Sentence every few pages to wonder at what I have read.

The novel’s narrator (for all but one instructive passage) is a woman sent to prison whose life and mind in confinement are saved by the gift of a dictionary, the best choice, the narrator reminds us, of an object to grab before stepping onto a desert island. She is transfixed by words, most notably the word “sentence”, a word that describes her term of incarceration and also the tightly defined and utterly pliable agency of language, usually containing subject and predicate (but not always) and which conveys a statement, question, exclamation, or command. The examples that intoxicate her in her confinement are, “Open the door.” and “Go”.

The novel is a ghost story of sorts in which both varieties of sentence have their place. Erdrich has happily welcomed the supernatural into her narrative, explaining that the tissue which separates us from the other is thin at times, permeable. The narrator herself in one moment of crisis is described as more porous than others. The novel operates within the decomposition of life during the Covid plague years and describes life in translation of Native people trying to claim their identity and the mess and muddle that is love, but it’s on my mind today because it is also fearlessly about words, the incantatory power of words, and, to return to the subject at hand, books.

The central character works in a bookstore, Erdrich’s bookstore in Minneapolis. Louise Erdrich shows up from time to time in the novel, offering thoughtful counsel at a distance from the narrator’s story. I now know much more about the business of running a bookstore, if it can be called a business. Erdrich’s account of the marginal viability of her store convinces me that independent bookstores are spiritual soup kitchens, hanging on because readers need sustenance and unheralded books need to be read. Our narrator is a born-again reader whose dedication to the store and to books includes the curating of reading lists. At the end of the novel, we find a comprehensive list by category, but throughout the narrative, characters and authors bounce into each other on a daily basis. I kept a list of books as I read, checking frequently to see if my library had them on the shelves (rarely) or if the various E-libraries could beam me the book for a few weeks. The clients of this real/fictional bookstore are grateful for the recommendations the narrator passes along, but they and the other employees of the store binge so quickly that they seem needy rather than reflective. The massing of titles, however, allows the endorsement of underappreciated authors.

I appreciate the treasure hunt now begun, but I miss the insistent energy of conversation with my human book friends. If we’ve both read a book, there are juicy particulars to savor; if recommending a book, I have to find the middle ground between dissipating some of the book’s magic and simply tossing a title in the air. We each have particular shelves that stand outside shared interests. I read mysteries and slipstream fiction, for example, gushing about Amy Bender’s The Particular Sadness of Lemon Cake, but have a pretty steadfast allergy to books about naval warfare with the exception of C.S. Forester’s Hornblower series. How did I happen to pick up Beat to Quarters? Ernest Hemingway (not a personal book friend) recommended Forester to every literate person he knew. That was a club I wanted  to join. So, thanks, Ernest.

Stephen Colbert used the term, “Quarantinewhile”, to introduce events taking place in the last two years. Quarantinewhile I have had to rely on the enthusiasms of authors I admire rather than the spontaneous conversation with book friends. Some authors are generous in expressing enthusiasm for other authors; some admit that they don’t read. Without particularly plumping for the slipstream genre, it has to be said that authors of that not-yet universally celebrated inclination celebrate each other at the drop of a hat. The greatest recent influence recently, however, has come in reading George Saunders’ A Swim in the Pond in the Rain: In Which Four Russians Give a Masterclass on Writing, Reading, and Life.

Writing, reading, and life … yup …for me,  that’s what friends are for. In the hope of finding another book friend or two, I’ll end with a provocation:

In addition to a dictionary, what five books would you grab before being shipwrecked on a desert island?