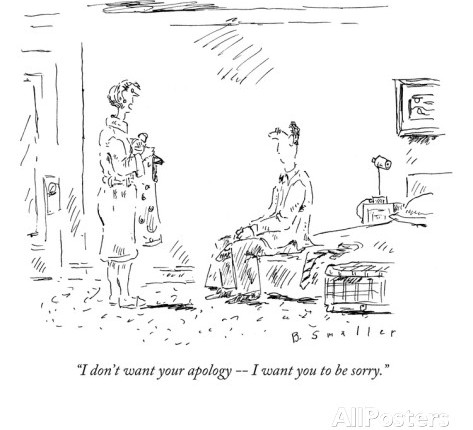 Every once in awhile, something I’ve heard  drops from one shelf in my memory warehouse to the floor, sprays widely, and I am jarred into thought.  Something about hearing the word, apology, pulled me back to a Sunday morning years ago.

I am about ten years behind in my listening to This American Life.  The bad news?  I’m getting farther behind every week; the show celebrated its 500th broadcast two years ago and is still going strong.  Good news?  There is an odd concentration of thought and feeling that comes in listening to a story that was entirely topical when recorded.  And, to digress in the service of candor, I listen to some favorites more than once, especially the two great episodes, both of which follow a disabled news team, first presented in “Special Ed – How’s Your News”.  I listen to the first story and the follow-up whenever the weight of the world gets too great; apparently we have heroes all about us.

In any case, a shuffle of archived shows brought me “Apology” and an episode I probably think about four or five times a week, “Apology Line”.  Here’s the description of the episode as presented by Ira Glass when the episode was rebroadcast in 1997.

” Each week on our program, of course, we choose some theme, bring you a variety of different kinds of stories on that theme. Today’s program, apologies. Stories of people struggling to apologize against some difficult odds. We’ve arrived act two of our show…, “Dial S for Sorry.”

In 1980, a New Yorker named Allan Bridge set up a telephone line that he called The Apology Line. And the way it worked was that you could call and confess to anything you wanted and you’d be recorded. Or you could call and you could listen to other people’s confessions. And over time– this is all pre-internet days. Over time, the whole thing turned into this little community of confession. People recorded messages responding to each other’s apologies. Mr. Apology, Allan Bridge, would leave messages responding to messages himself. Or sometimes he would call callers off the line and talk to them.”

Some of the apologies are fairly innocuous, some are appalling, and some are devastating.  A caller lists the various violent and dangerous acts he has perpetrated on teachers, schools, governmental buildings, and individuals.  The shift to a slightly higher degree of injury (fire bombings) is deleivered with little inflection.  The call ends on this note:

“I’m sorry for the way I’m calling right now. I’m calling by way of a phony credit card. I’m sorry for harassing the teacher in school. I feel bad about it. I’d like to have a new lease on life.

What else? I’m sorry for just harassing a lot of people. For causing pain to my family. I felt so sad I was sick. I was sick by it. That’s all I have to say. So long.”

A runaway checks in:

Hi, I’m a runaway and all I want to say is that I’m kind of sorry that I left. See, I’m 15 and I saw your number in the newspaper. When I saw it, I had to call because I mean, you walk around on the streets all day long just looking for someone that just might say, hey, want a place to go? Come with me. They’ll give you food and everything. And they won’t ask or anything back. That’s all I want. I guess I take up too much time on the tape. But I just got to talk.

A phone call allows a surviving son to admit that he extorted payment from his dying mother, charging her $5.00 for a glass of water, $10.00 for a sandwich.

The call that caused me to pull my car to the side of the road came from a man whose confession was coldly lacking in affect.

“I’ve never told anyone this except my shrink. I accidentally killed my younger sister when I was a very small child and it’s haunted me all my life because I didn’t really mean it. It was just a game to me and I was really too young to realize what I was doing. And I was putting her head inside a plastic garbage bag and putting a rubber band around her neck just to see her face turn blue. I guess it was a lot of fun and I didn’t mean anything bad to happen. But I guess I didn’t realize what would happen if I did this too long and she suffocated. I hid the plastic bag and I went out of the house. My parents weren’t home. And they never found out. They thought it was crib death. They never found out I did it.

I’ve never been able to tell them. I think it would hurt them worse than losing her to find out that I did it. I kind of wish my parents could hear this tape, but I guess they never will.”

I guess it was a lot of fun.

Let’s be clear.  That’s NOT an apology.

While there is value in confession, even the sort of anonymous confessions made on the Apology Line, an apology begins with the understanding that harm has been done, moves quickly to the assumption of responsibility, and then to an expression of regret, followed by an open-ended willingness to do what is necessary to make the situation right.

It’s human nature to hope that an apology will bring forgiveness, and it may, but an apology offered in exchange for forgiveness is essentially a transaction, hoping words are currency.  They aren’t.

I had to learn that my version of apology was often simply an excuse.  “I’m sorry, but that guy on the bus who stood on my toe made me so mad that I snapped at you.” That’s not an apology; it’s a defense of my behavior.

I was also the master of other equally bad apologies.

For example, I have learned that  adding the word “if” turns the responsibility for  injury back on the person I’ve injured.  “I’m sorry IF you took it that way.”    Uh, obviously my remark was taken as I intended it; I just hoped I could duck out of responsibility for it.

I could be even more offensively weaselish.  “Ok, I’m sorry I didn’t show up, but YOU are the one who wanted me to clean up the garage.” The unfinished end of the sentence is, “so it’s your fault.”

I may not be alone in not  wishing to be held accountable for my actions, but I think  I developed some advanced skill in pulling myself out of contact as consequences drew near.   I know I’m still withholding when I apologize so generally or so abstractly that there is no texture or weight to my apology.  The worst is flippant.  “Sorry about that.”  Only slightly better is, “I’m sorry for whatever it is that I’ve done. ” Marginally better?  “I’m sorry for everything.”  The shield is in place even as the words are  said.

I have had to learn that an apology demands clarity.  “I’m sorry I pouted and slammed dishes rather than talking about what was on my mind.”

The final level of apology has to do with contrition, authentic regret or remorse coupled with determination not to repeat the hurtful behavior.  In some cases, an authentic apology demands a next question.  “What can I do to make this situation better?”

That’s it,for apologies,  unless I’ve offended anyone.  IF I’ve offended it was because I’ve been running a fever and lost my favorite pair of sneakers, and YOU are the one who chose to read this stupid blog post anyway.  Sorry about that.