I  used to love to be scared, saving what remnants of allowance I had for roller coasters, fun houses, and terrifying jump-out-of-the-closet, hand-from-under-the-bed, masked-face-in-the-rear-view-mirror, seemingly nice guy-is-a-psychotic-slayer-on-a-spree, children-calling-demons-to-eat-their-parents  sorts of movies.  Not so much these days, which, I’m pretty sure, has something to do with having arrived at what Psalm 90 announces as my agenda until it isn’t.

“The days of our years are threescore years and ten; and if by reason of strength they be fourscore years, yet is their strength labour and sorrow; for it is soon cut off, and we fly away.”

Uh, yeah.  So, here I am at three score and ten, watching Youtube videos of kittens and puppies, checking to make sure the frolicking doesn’t spike my blood pressure, but knowing Halloween is just around the corner, and I love Halloween.  I have my inflatable vampire Tigger at the ready, not to be inflated before October 15 (there are rules, after all), and I’ve harvested the pumpkins, but really, it all feels very tame.

I’m seeking safe terror, which would be entirely oxymoronic were it not for my memories of countless hours watching movies presented as blood chillingly horrifying on late night televison.

Nothing remotely chilling ever happened, although a few inspired something like unease, primarily because figures and shapes were obscured by fog and mist.  Every once in a while the station would pop for a classic in the Horror genre, Dracula, Frankenstein, The Invisible Man, the Mummy, but most weekends coughed up groaners such as The Attack of the 50 Foot Woman, Reptillicus, Dementia 13*, The Thing From Another World. The Magnetic Monster, Dr. Terror’s House of Horrors, Attack of the Crab Monsters, The Abominable Snowman, Varan The Unbelievable, or The Deadly Mantis.

It didn’t matter, primarily because I was staying up late, often at a pal’s house, and because the host of the show more than made up for the lameness of the film.  The late night host in my part of the world was a voice actor turned creepy celebrity named Zacherly.    Although he moved from station to station, Zacherly remained wryly mordant, descending into the crypt to visit his wife, Isobel, shut in a coffin, berating his assistant, Igor, hoisting severed heads dripping with chocolate syrup, drinking from vats bubbling and smoking, the occasional toad caught in his flagon.  Fog, and flashes of lightning set the stage, followed b y Zacherly’s trademark howl, “Give me LIGHT!”.

Cryptkeeper, undertaker, vampire… it was never really clear what sort of creature Zacherly purported to be, and no one cared.  His job was to lurk, toss gore-stained objects around the crypt and mock the film about to be shown.  He occasionally spoke over the dialogue, clarifying one heinous act after another.  More reguarly, a break in the action revealed him napping or otherwise entirely disengaged from the action  on the screen.

So popular was this character that he mounted a presidential campaign in 1960, unfortunately failing to win enough support to appear with Nixon and Kennedy in the first televised debates. 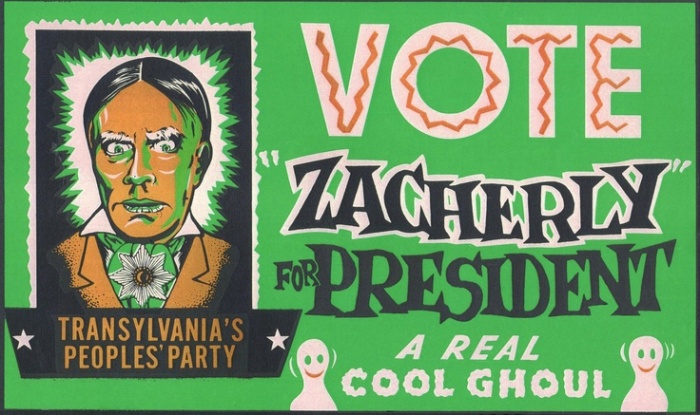 By the 1970’s many stations had cloned ghouls and vampires of their own, Vampira, Sinister Sydney, and, the most successful, Elvira, Mistress of the Dark.  Whereas Zacherly looked like something literally unearthed moments before showtime, clots of dirt still clinging to his decaying clothing, Elvira was hot stuff, exposing cleavage and valley girl snarkiness in response to movies as uninspired as those hosted by Zacherly.

Among the other imagined programs offered by the “network” were Battle ofthe PBS Stars, pitting Carl Sagan vs Mr.Rogers in head-to-head combat, the soap opera, Days of the Week, and The Great White North, in which Doug and Bob McKenzie mocked Canada and things Canadian while guzzling beer and referring to each other as “hoseheads”.  SCTV deserves a posting all its own, but suffice it to say that Martin Short’s grinning character “experiencing some difficulty in completing high school” as a contestant on SCTV’s version of Jeapardy, Half-Wits is must-see TV.

Flaherty’s Count Floyd was clearly not happy to be hosting Monster Chiller Horror Theater; the network was cheap so Floyd doubled as weatherman and vampire.  The Count was also not too clear on the concept, playing a vampire who howled as a werewolf might.  He wasn’t helped by the selection of films he had to present.  He limped along with Swedish auteur Ingmar Bergman, but had trouble convincing the kids that The Odd Couple was “verrry scary”.  The camera often caught him sneaking a cigarette as the film paused for a commercial break, often openly contemptuous of the travesty on the screen, but he became absolutely riveted when the network screened soft-core horror such as Dr. Tongue’s 3D House of Stewardesses, Dr. Tongue’s 3D House of Cats, or Dr. Tongue’s Evil 3D House of Pancakes.

John Candy played the lisping villain, Dr. Tongue, with gravitas, ponderous self-importance mixed with bouts of unbridled lechery.  In a memorable scene from Dr. Tongue’s House of Stewardesses, Tongue orders his faithful deformed servant, Eugene Levy, to, “rip off their blouses and their skirts,” which the hunchback does with more efficiency than one might expect, given that he is bent double and can only shuffle from stewardess to stewardess.

With the commercial break we found Count Floyd, 3D glasses securely in place, begging the producer to kep the film rolling.