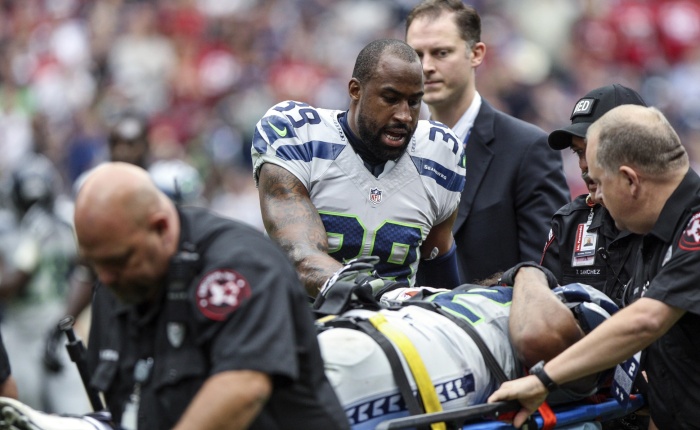 Professional football is a violent enterprise; huge men hit each other at high-speed causing grievous injuries, from concussions and broken limbs to shredded muscles and ligaments.  No matter how brutal or widespread the carnage, the show must go on, the season has to be played out, and the stakes are high.  It happens that I have known two team doctors (Lions and Seahawks) and one team dentist (Hockey’s Boston Bruins).  I can promise you that you really do not want to know how emergency medicine is practiced on the sideline; I will only tell you that 20 cc.s of fluid drained from an injured knee twice in each half is the rough equivalent of 24 ounces, about the amount in two bottles of soda.

Because injuries are expected, football teams keep a large roster on hand, and another smaller cohort on what is called the practice squad.  As bodies hit the gurney, replacements need to be conditioned and prepared to step into the middle of a game; they need to be familiar with the playbook and need to be able to face the best players on the opposing squad.

As the season nears its end, and only a few teams remain to contend for conference or league championships, the need for heroism on demand is intensified. “Next Man Up” has become the phrase that players and coaches use when questioned about the impact of a lost star.  The words are spoken with thin-lipped stoicism, spartan hardness of features; this, we know from their expression, is war.  Imagine the Roman Legion facing hordes of barbarian invaders, the first line falling, the next taking its place, then the next.  Desert?  Run  away?  We think not.  The penalty for desertion or mutiny was Decimation; one of ten convicted men beaten to death bare handed by the other nine.

Two other expressions linger outside of the sporting arena,  “Cowboy Up” and “Man Up”, both of which have the unfortunate aroma of unconscious or unexamined gender bias attached to their cowhide, tobacco stained, bronc busting exhortation to summon responsibility, courage, and resilience, arguably qualities possessed in equal measure by men and women  I can’t really guess what Woman Up would mean; I’m going to leave that conjecture to others.  Person Up doesn’t do much for us, but Get Human might.  In considering the lessons taken from sport, would the concept be diminshed if we were to speak of the Next One Up?

As this season has played itself out, and at least two contending teams have spoken the words in almost every press conference, Next Man Up has moved from the gridiron to the board room, and it is in that evolution that some interesting issues pop up.

It is not surprising that business enterprises long monopolized by men would turn to battle or sports to find metaphoric language for leadership; we’ve had Barons and Captains of Industry for a long time. It doesn’t take much to infer gender in looking at words such as Boss and Bossy.  Is a man ever called bossy?   Abrasive?  Nagging?  Language isn’t everything, but it reveals unconsciously held opinions, and the many articles suggesting that businesses can improve performance by adopting a Next Man Up philosophy are quick to explain the efficacy of the principle in the world of male sports.  As it is translated into leadership advice, however, a far more inclusive view of the workplace has to develop and develop quickly.

Mike Tomlin, coach of the Pittsburgh Steelers, often uses the phrase because, well,  because he had to; his team was among those most ravaged by injury.

“The more I looked at it, I saw that there’s a fine line between being a backup and being a really good player in this league. And sometimes, it’s just about being right-minded and being in the right place at the right time. When you’re at the top level of football, that No. 1 cornerback and that fifth cornerback – there’s not a lot of difference between them from an ability standpoint a lot of the times.”

Leaving the playing field behind, the principle endorses the inclusion of less experienced, less highly placed employees in positions of real responsibility.  A good manager, according to this philosophy, better make sure that a number of people new to the team  are involved in important jobs so that they are able to perform well when need of them arises.  People new to the team include people traditionally under represented in higher positions, giving them the opportunity to take on meaningful responsibility and the preparation necessary in order to become the Next One Up.

The next observation demands anther reference to the world of sport.  Without getting into the particular skill sets required at particular positions, and admitting that I may favor players from the University of Michigan from time to time, Charles Woodson and Jabrill Peppers are two impact players who play or have played both offense and defense; they can run, pass, and catch, and move from one position to the next without missing a beat.  In order for a football player to emerge as the Next Man Up, it’s necessary to let him  develop skills specific to each position.  In the larger world, that principle would suggest that cross-training, which has more than enough benefit in demonstrating what work others in the organization actually do, could also be significant in allowing talented people to move from one area of need to another.

Finally, undrafted role players driving a two-year-old Corolla value teamwork, even as they recognize that owners hop in private planes after a game without having to deal with concussions or shredded parts, and that stars lounge in a Rolls-Royce, signing endorsement deals as they leave the parking lot; top-down organizations have a tougher time engendering a spirit of shared enterprise.  If any outfit hopes to develop Next One Up principles, it had better look at what teams do.  In the first place, shared effort brings shared reward; a playoff victory or championship puts the same share of bonus money in each player’s pocket, without regard to rank or stature.  Then, the coach is not phoning in advice from Monaco; coaching takes place in the moment, on the field.  The coach has to be present, aware of each individual’s progress, and invested in allowing each one to prepare to rise up.

Football and business journals aside, I like this idea that each of us can be ready to step up when needed.  We live in contentious and dangerous times, and we’re encountering injury everywhere we look.  It’s worth asking which of us will be called upon to be the Next One Up?