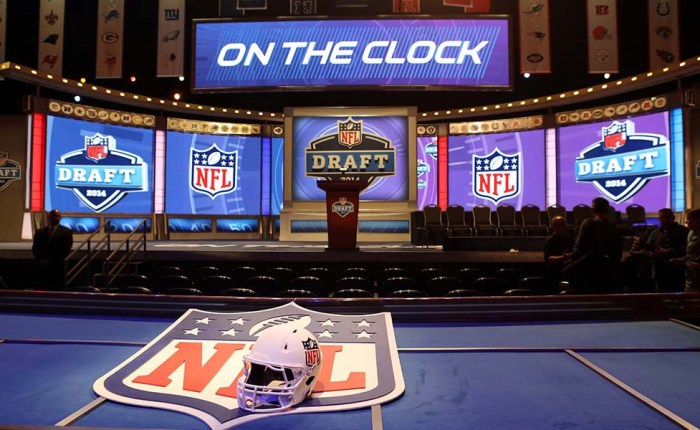 It’s almost over, and I think I’ll make it out of NFL Draft Week alive.

Seventy-five THOUSAND football fans stood outdoors in Philadelphia last night to witness the selection of the most highly regarded college football players by NFL teams eager to concuss them.  Worst teams pick first, which sounds absolutely fair until we notice that the same worst teams seem to get the same slots in the lottery.  Well, it’s actually the same team, the Cleveland Browns, feeding off the bottom year in and year out.  Browns fans, and they do exist, were on pins and needles until the first selection was announced as the front office has picked non-functioning quarterbacks with stunning regularity.

Why do I hover over the Brown’s pick?

A.  Because it doesn’t matter – the Browns will be awful.

B.  Because there were no other real issues.

C.  Because in delivering the announcement of the selection, universally despised Commissioner of the NFL, Roger Goodell, faced the full-throated disapprobation of seventy-five thousand haters.  Full-throated hating is what Philadelphia does best, and viewers were not disappointed.  Goodell appeared unimpressed with their efforts, however, perhaps because he pulls down thirty-four MILLION dollars a year.

The draft provided no drama or gripping tension, and yet, we have had three weeks of non-stop prognostication from “experts” who have analyzed every vertical leap, every second shaved in the forty yard dash, every misdemeanor and felony.  The human bobble-head, NFL Draft Guru, ESPN’s Mel Kiper, had grappled with every possible contingency, assuring everyone within the sound of his voice that he absolutely with complete certainty and aggressive assurance knew precisely which players would be chosen by which teams and in which order.

I may be flying in the face of long-held convictions, but my experience has been that weather forecasts, economic forecasts, palm readings, burnt entrails, and recent Presidential polls have all performed with about the same level of success.

So, last year Kiper landed about twenty-two percent of his predictions.  How did Nostradraftsmus do this year?  Let’s just take the first ten to keep computation simple.

Are there moments of grace beyond the greeting given Commissioner Goodell on EVERY announcement?  Well, despite anchor Trey Wingo’s unfortunate confusion of Sasquatch with Chewbacca, we were spared the nasal wit of long-time host, Chris Berman, whose fondness for punning nicknames was legendary.  He, after all,  came up with Sammy “Say It Ain’t” Sosa, Mike “Pepperoni” Piazza, Miguel “Tejada They Come, Tejada They Fall” and his finest (?), Chuck “New Kids on the” Knoblauch.  There is no doubt we would have been treated to his wry dubbing of the Houston Texan’s pick at quarterback, Deshaun “Elementary My Dear” Watson.

Enough for now.   The Lions are on the clock.

One thought on “The Cleveland Browns Are On The Clock”