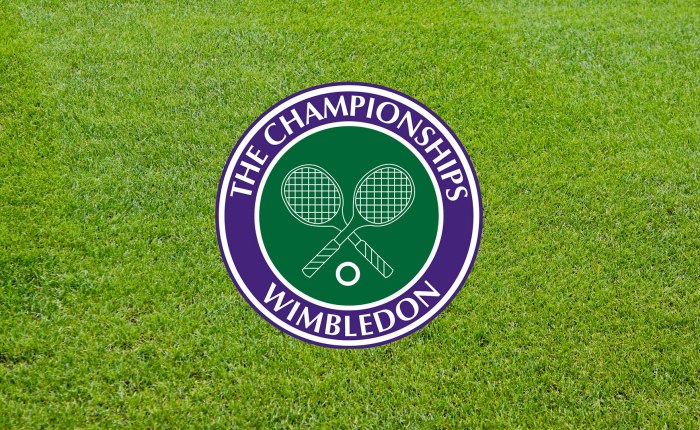 First of all, it’s July.

Or, I could watch round-after-round of tennis from Wimbledon.

I confess an unhealthy regard for pomp and circumstance, the trappings of tradition, and the genteel reminder of what sport once looked like in an age of determined, and, yes, blissful, ignorance of a world beyond the All England Lawn Tennis and Croquet Club in Wimbledon, home to the oldest tennis championship in the world.  The Championships, Wimbledon (usually referred to as Wimbledon) are played on grass courts, the only one of the Grand Slam or major championships to be played on grass.  The which would be more than enough to make Wimbledon refreshingly outdated and charming, even if dangerously close to the merely precious .  By the end f the second week, it is true, the courts show some wear, but at the start, just after they have been trimmed by what is a virtual grass Zamboni, they are magnificent.

Place, then, remarkably fit young men and women, dressed with uniform modesty in white on the courts of green, and the spectacle is unlike most other athletic contests with the obvious exception of the other pastimes played only by mad dogs and Englishmen, games such as croquet, cricket, and lawn bowls, games in which wearing white was eminently sensible at noonday in the far reaches of the now almost forgotten empire.  “Tennis whites” were the standard of dress for decades, deflecting the heat and pronouncing the player wealthy enough to have easily stained clothing dry cleaned, or, one presumes, cast off, given to urchins begging at the gates or to housekeepers puzzled by the prospect of donning a tennis dress.  In addition, tennis sounds different from other sports, at least from the sports I watch.  I have to assume that crowd noise builds in lawn bowls, but just as the tree falling in an empty woods creates an enduring koan, the tumult of the bowls crowd has to remain hypothetical.  Now that golf’s formerly hushed and properly reverential followers have given way to raucous “In The Hole” yahooing, it is only tennis in which decorum remains as essential as Wimbledon’s signature strawberries and cream, decorum so carefully guarded that players wearing black (or blue) underwear are escorted off the courts and advised to make sure that every layer of tennis wear togs as white as the moon on the breast of the new fallen snow .

The sharp contrast of white against a green background is pleasing indeed, but the greater pleasures are best described in contrast to other sports.  Want action?  There are no huddles in tennis, no trips to the mound; coaches are sequestered in seats at a remove from the courts. Yes, there is the opportunity for an instant replay; each player is granted three challenges to the umpires’ calls, But, and this is part of the on-the-ground strategy that sets tennis apart, a challenge used ill-advisedly is a challenge not available in a situation that may determine the outcome of the match.

Want power?  A powerful serve hitting the opponent’s court at up to one hundred and forty miles per hour is comparable in many way to the home run, but that serve is likely to be returned with close to equal force, initiating a true battle, shot-by-shot, game after game.  Some might argue that although tennis is nothing but action, an evenly matched pair of players can play at the height of their powers for hours until one finally outmatches the other.  True, but every minute of that long set or match is filled with constant and often spectacular action.  While a baseball game does occasionally sparkle as a great throw from centerfield catches the runner at the plate, or a third baseman spread eagles on the line to grab a rocket shot to the hot corner, we’re lucky to get one or two web gems per game.  Great tennis shots?  In an exchange on any length, we’ll see at least two or three per point.

Points?  How about this?  There are no ties in tennis; there are no matches that end up nil-to-nil.  One tennis player will score every time the ball is served, and should the game score remain even, a tie-breaking game finishes things off with a flourish.  The outcome of a hockey or soccer game can come down to a shoot-off.  Please.  Tennis does not lower itself to an unseemly trading of powerful serves to end a game.

It should also be noted that tennis is the only major sport I know in which the quality of women’s play and men’s play are recognized and appreciated with equal enthusiasm.   There are cycles, eras in which the men’s game is rich with great rivalry, but there are equally compelling eras in which remarkable women players seem to emerge at the same time. When we speak of tennis legends, we are as likely to think of Martina Navratilova as we are to think of Pete Sampras.  I’m not sure that there is another sport which could produce a female athlete such as Serena Williams who is considered the most dominant athlete of a decade, comparable to Tiger Woods, Michael Jordan, Tom Brady.

Every sport has its share of odd characters, and here I’m assuming again that there are croquet cut-ups and bawdy cricketers, and tennis has its share of bad boys and girls, but not as vile as those in, say, the NFL and NBA.   Would I choose to ride in a closed car with any of the NFL’s unreformed wife-beaters?  Uh, no.  Could I survive the same trip with John McEnroe or Ilie Nastase?  Sure.

I have my favorites, to be sure, and Britain’s Andy Murray is not among them.  He went off again, berating an umpire at Wimbledon when a ballboy inadvertently put a women’s ball into play during a match that Murray lost.  Ok, I’m not going to go into the difference at Wimbledon between the ball used by men and that used by women; it has to do with fuzz, and that is outside the scope of this article.  In any case, yes, Murray was foul-mouthed and surly in the heat of battle, but … it was Murray who responded to the off-handed sexism of a reporter who declared that Sam Querrey, who had defeated Murray, would be the first American player to reach a final match at Wimbledon since 2009.  “Male player”, Murray interrupted.  That correction came quickly and in the midst of an interview conducted within minutes of what must have been a devastating loss for Murray.  And, it is Murray who has considered boycotting the Australian Open, another Grand Slam event, as the venue includes a court named after a noted homophobe, Margaret Court.

So I spent some part of two weeks watching the brilliant play and unexpected upsets that Wimbledon brought us this year.  Do I intend to settle in to watch play in the somewhat less rarefied mess that is the US Open, played on hard courts in New York?  Am I preparing for another half-month at the USTA Billie Jean King Tennis Center in Flushing Meadows – Corona Park, Queens?