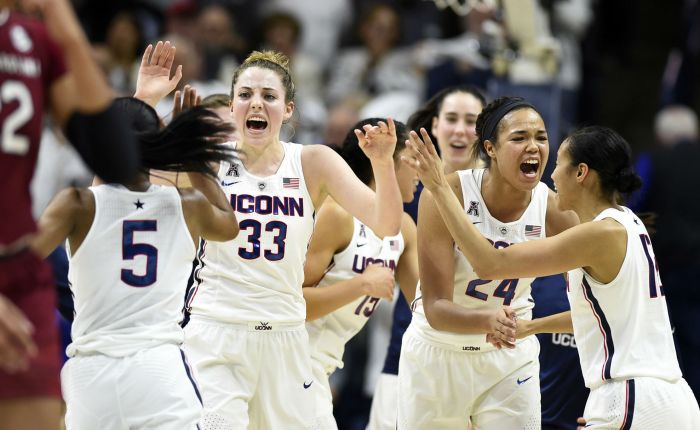 I’m writing today about women’s basketball, and you know that because “UConn”,  the title of the piece, now brings to mind women’s basketball, but the remarkable accomplishment of a team from a relatively small and absolutely unheralded Northeastern university speaks to more than the Huskies’ dominance in the sport.  Most recent conversation about UConn has been about the danger of a single team’s prominence and its stranglehold on the national championship, even though a feisty Mississippi State team knocked UConn out in the Final Four last season, an anomaly that did not silence the debate.

“Is UConn bad for women’s basketball”?  Back and forth like a series of turnovers at midcourt.

Here’s the thing:  If you have to ask the question, the answer is there wouldn’t be a conversation about women’s basketball without UConn’s transcendent legacy.

Have women’s collegiate sports come of age, particularly since the implementation of Title IX?  Absolutely?  Are women’s sporting events as well attended as men’s?  Not usually, or almost never with a few significant exceptions.  US National Women’s Soccer game tickets may be hard to come by, and final matches at the US Tennis Open are up by more than 30% as more than 690,000 attended in person, in part because American women in addition to the Williams sisters have moved up the ranks.  The highest attendance of any US women’s professional team belongs to the Portland Thorns FC of the NWSL who have averaged about 13,000 per game and a high of 17,653 last season.  In the WNBA, the highest numbers showed up for the 2000 All Star game in Phoenix (17,717) and for the final game between the Minnesota Lynx and the Atlanta Dream(15,258).

At the collegiate level, the University of Utah Gymnastic team leads the pack with an average attendance of 15,000, although as many as 15,600 packed into an arena with a capacity of 15,000 to see the Red Rocks take on the Bruins of UCLA.  The next contender is also a gymnastic program, at the University of Alabama, averaging more than 13,000 per game.  Where’s UConn’s women’s basketball program?  Behind South Carolina, Tennessee, and Iowa State.

So, bad for women’s basketball?  Apparently not, and here’s the argument that carries the most weight.  Although there may not be parity in women’s basketball, and although UConn blows out teams like St, Francis in the first round of the tournament by a score of 140 – 52, leading the St. Francis Red Flash by 94 – 31 in the first half, every televised slamma-jamma-fast break- three point-outlet pass victory brings more viewers to the sport, more attention to the game, and more intensity to the coaching and training of female high school and collegiate basketball players.

Tennessee held the crown for decades.  Coached by Pat Summitt, one of the toughest and most revered coaches in any collegiate sport, the Lady Vols have appeared in all 36 tournaments, 34 Sweet Sixteens, and 18 Final Fours.  In 1988-99, a year in which they won a National Championship, the Lady Vols went 35-2.  Other programs, Baylor, Louisiana Tech, Mississippi State, South Carolina, Stanford, Notre Dame have risen to join Tennessee as contending programs in any year, and any of them could conceivably beat UConn as Mississippi State did last year.

But UConn’s women hold the top two longest winning streaks in collegiate basketball, winning 111 consecutive games from 2014 to 2017 (buzzer beater loss to Mississippi State) and a streak of 90 games from 2008 to 2010.

111 consecutive games.  What talented young woman would not want to be a part of that dynasty?

Coach Gino Auriemma arrived in Storrs, Connecticut in 1985.  I grew up in Connecticut, and I can find Storrs on a map, but I would bet that most of my readers would need some help to pinpoint the Mecca of women’s collegiate basketball.  Storrs is a sleepy town in the agricultural northeast of the state with a population of about 15,000, and UConn was one of the New England state universities that enjoyed brief flashes of celebrity as one of the men’s basketball teams bounced out of the American Conference and into the limelight.  Julius Erving took the University of Massachusetts to prominence at the end of the 1960’s, and John Calipari and Marcus Canby resuscitated the program in the early 1990’s.  It was UConn’s men who first brought attention to the university winning the NCAA championship in 1999, but by 1995, the women had climbed to the top as well, defeating a Pat Summitt coached Tennessee team with the help of Rebecca Lobo, Kara Wolters, Jennifer Rizzotti, Nykesha Sales, and Jamelle Elliott.  The strength of both programs allowed UConn to become the only college to sweep the tournament with both men’s and women’s teams, in 2004 and 2014.  The men rank sixth all-time in NCAA tournament success, but few of us mark the calendar to watch them play.  Even fewer tune in the hope of seeing them lose.

And that’s where I think the UConn women’s team has had a salubrious effect on the quality of the game as a whole.  They face some strong competition during the season of course, but for every other team, the UConn game is THE game of the season.  Not only does UConn make regular season basketball compelling (and few teams do), they push every opponent to the highest level of their game.  The game is elevated, the stakes are high, and the sport becomes a topic of conversation as is true of no other women’s sport.  Finally, and perhaps most importantly, UConn plays superb team basketball.  They shoot threes with the best of the best, but also speed in transition, steal a lot of balls, find the open player, grab rebounds, play killer defense, and never stop scrapping.  They play an elegant, furious version of basketball that reminds me why I love the sport.

Last season’s team had lost outstanding players, played younger, and had to scrap a bit harder.  The loss to Mississippi State ended the streak, but pushed both Mississippi State and South Carolina into greater public attention and brought heightened drama to the current season.  In regular play, the Huskies were 16-0 in conference this year and 19-0 against teams outside the conference.  Maybe not all that much drama.

They face South Carolina tomorrow and, should they move along, either Mississippi State or UCLA in the final game.  I watch golf when Tiger plays and I watch basketball when UConn plays.  I’m hoping they keep this streak alive, race to the finish and play basketball as basketball was meant to be played.