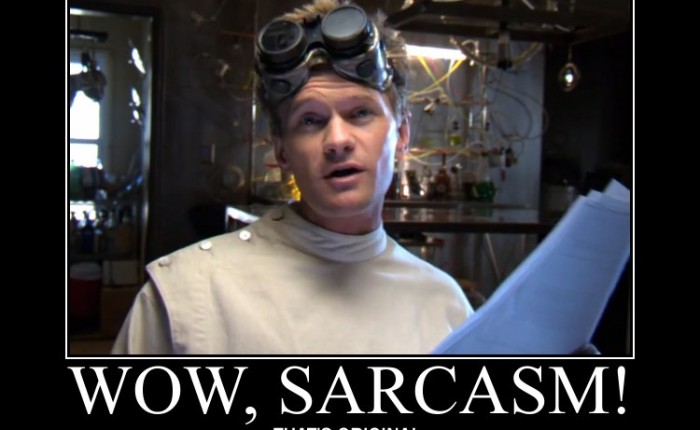 I would rather eat flypaper than get into it online or in the twitterverse, but my wife’s profession demands that she stay current with issues in the local community, and so, she inevitably comes up against surprisingly rabidly held differences of opinion.  A recent post in response to a well-meaning piece of advice (she reads me the good ones) uses the phrase “in a perfect world” with venom and sarcasm dripping in equal measure each time she uses the phrase, and she uses it in every sentence.  In a perfect world, the writer intimates, the suggested idea might be of value; in our world, no blinking way. With each repetition, however, the sarcasm increases in intensity, aggressively crossing a line somewhere around the fifth or sixth iteration. However obliquely crafted, this is an attack on the person offering a suggestion. It is not uncommon to find a writer in opposition to an idea, but why angry?  If angry, why sarcastic rather than directly confrontational?

Sarcasm interests me because it allows both injury and deflection: ” I never called you a drooling idiot.  I just suggested that there does not exist a universe in which your pathetic inanity might be remotely worth considering.   Have a nice day.”

Of course, there’s a lot of sarcasm out there, most of which is simply part of contemporary habits of language.  Some studies have found that sarcasm is almost a second language, occurring in about twenty percent of conversations, hardly noticed and virtually inoffensive.  “Yeah, right”, “Nice try”, “I’d love that”, and hundreds of other statements are sarcastic in that they are insincere, but so commonly used that they’ve lost most of their sting.  Most of us meet sarcasm often and early on and come to understand that while it is insincere and occasionally confusing, it’s a language we had better learn to negotiate if we want to fit in.  We use it without thinking, often as a comedic counterpoint to conversation, although even sarcasm  used to humorous intent can backfire at times: “No, you look fabulous”.  That might fly as bros shop for tee shirts, but fall flat at a fitting of a wedding dress.  In some instances, we had better mean that the person looks fabulous or keep our opinion to ourselves.

That’s all transactional sarcasm, give and take, sarcasm lite.  The darker, heavier, more bruising brand of sarcasm takes two forms.  The first, and the most confusing is intentional insincerity deployed to create emotional confusion, awkwardness, or embarrassment.  The second is the “perfect world” kind, anger passed off as humor.

To be clear, both of these more damaging forms of sarcasm are about power.  The origin of the word is with the Greek for stripping the flesh, and sarcasm used to exert power is intended to cut.  Anger thinly disguised as sarcasm is an expression of contempt, bullying to create injury.  My powers of diagnosis are fading by the minute, but the link between insecurity, defensiveness, fear, and angry sarcasm seem pretty clear.  Clumsy exertion of dominance is part of the sarcastic attack, but there’s fear at play as well; anger expressed directly takes a stand, is willing to be seen for what it is, and accepts accountability.  Angry sarcasm wears a shabby mask.

Intentional insincerity is harder to deal with.  This is trap-door sarcasm.  A person you think of as reasonably decent asks what you think about the food served at a party.  You answer sincerely, but are met with, “You didn’t think I actually meant I wanted to know, did you?  That’s funny.”  Trap door.  The bottom falls out.  You are made to feel stupid, or hypersensitive, or conceited, or thoughtless in responding to what you thought was an honest question or statement.  There’s no room to respond without playing into the trap.  This is condescension, manipulation, contempt, and cruelty hiding as a joke.

In a perfect world, to borrow a phrase, we say what we mean and mean what we say, and even in this imperfect world, it’s never too late to do better.  Language re-training in our house started when our kids were small.  We saw how the ordinary sarcastic joshing,  teasing, what was essentially sarcasm lite presented by friends, grandparents, strangers who meant no harm, confused and injured our children.  Yes, the occasional sarcastic comment slips out, but not often, and not to manipulate or dominate.  For example, I am baselessly accused of snoring when I drop off while watching television.  I jolt awake and ask, “was I snoring?”  I think you can guess what comes back.

Never too late to do better, family.