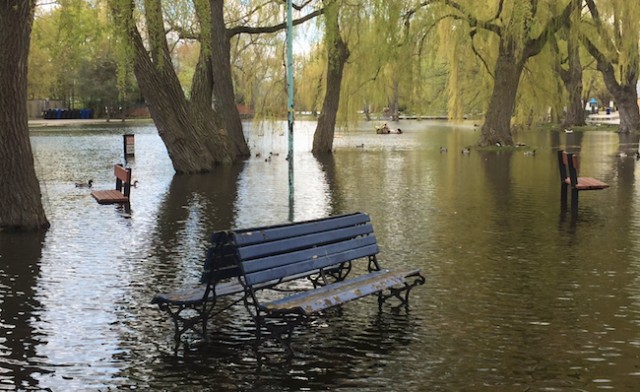 The article entitled “A Nightmarish Climate Report” describing the findings  of the Intergovernmental Panel on Climate Change has been sitting in my inbox for more than a week.  It is, without doubt, the most significant article I’ve received in the last five years.  Vitally important.  Time sensitive, as it were.  Last chance.

Unopened for a week.

Here’s an early paragraph just to establish the gravity of a temperature rise of more than 1.5 degrees.

Last night, in Incheon, South Korea, after a week of deliberation, the I.P.C.C. released the new findings. The summary tells a nightmarish tale—one much worse than any of those in the I.P.C.C.’s previous reports—surveying the climate-change impacts we’re already experiencing with one degree of warming, and the severity of the impacts to come once we surpass 1.5 degrees of warming. Ten million more people would be exposed to permanent inundation, and several hundred million more to “climate-related risks and susceptible to poverty.” Malaria and dengue fever will be more widespread, and crops like maize, rice, and wheat will have smaller and smaller yields—particularly in sub-Saharan Africa, Southeast Asia, and Central and South America. Security and economic growth will be that much more imperilled. “Robust scientific literature now shows that there are significant differences between 1.5 and 2 degrees,” Adelle Thomas, a geographer from the Bahamas and also one of the report’s lead authors, told me. “The scientific consensus is really strong. It’s not just a political slogan: ‘1.5 to stay alive.’ It’s true.”

No surprise really, absolutely anticipated, terrible, catastrophic.  And yet …

What am I supposed to do about it?

I have to guess that the passengers on the Titanic would have done something  had they known their watery demise was imminent.  Maybe?  Or, would they have continued to assume that someone in charge would eventually do all that was required to keep the ship afloat?  Is that my problem?  Am I still waiting  for the grown ups to do what grown ups do?

Of course, some grown ups did start to organize a world-wide effort to contain carbon emission and global rise in temperature.  But then, in a moment, the work of decades was undone, and the temperatures continues to climb.  So, my faith in government to respond, even with catastrophic information in hand has been beaten out of me.  So many individuals working around the globe to bring attention to imminent and irreversible mayhem, and yet, those with perhaps a decade or so left on the planet they govern maintain a bizarre imperviousness to science, reason, and the responsibility of stewardship.

Lesley Stahl interviewed the president on 60 Minutes, pressing hard with each question.  Here’s the portion of the CBS transcript of that interview that has to do with greater global warming:

Lesley Stahl: Do you still think that climate change is a hoax?

Lesley Stahl: I wish you could go to Greenland, watch these huge chunks of ice just falling into the ocean, raising the sea levels.

President Donald Trump: And you don’t know whether or not that would have happened with or without man. You don’t know.

Maybe, after human life has been eliminated.  Good chance of some equilibrium then.   But that is then, and this is now, and now is all that matters to the folks in charge this week.  Well, now and the trillions and trillions of dollars.

If we all chipped in, could we do something?  Like have a bake sale or a car wash?  I’m a confirmed inactivist, but I’m scared enough that I’d chain myself to …. what?  Where’s the point of intersection?  What’s left to do by ourselves?

So I’m overwhelmed by the complexity of turning the ship and increasingly dispirited by clumsy, ugly, self-serving partisan chicanery.  Seems as if a hefty portion of the country is putting up points on a different scoreboard.  It’s not easy for me to acknowledge that the dismissal of the UN’s report is touted as one more victory over the forces of pointy headed progressive secularism, necessary to the systematic undoing of the fetus killing liberal establishment.

Partisan political skullduggery stinks of macho one-upmanship, connected t the preservation of privilege.  It’s a rotten game and the stakes are too high to see it as anything but criminal.

One characteristic of sublime ignorance is the failure to see connections, to recognize causes and anticipate effects.   Here’s an effect, reported by Ben Guarino in the Speaking of Science section of the Washington Post:

“Insects around the world are in a crisis, according to a small but growing number of long-term studies showing dramatic declines in invertebrate populations. A new report suggests that the problem is more widespread than scientists realized. Huge numbers of bugs have been lost in a pristine national forest in Puerto Rico, the study found, and the forest’s insect-eating animals have gone missing, too.

In 2014, an international team of biologists estimated that, in the past 35 years, the abundance of invertebrates such as beetles and bees had decreased by 45 percent. In places where long-term insect data are available, mainly in Europe, insect numbers are plummeting. A study last year showed a 76 percent decrease in flying insects in the past few decades in German nature preserves.”

The term used by the post to describe this report is “Hyperalarming”.

I am alarmed, and what difference does that make?