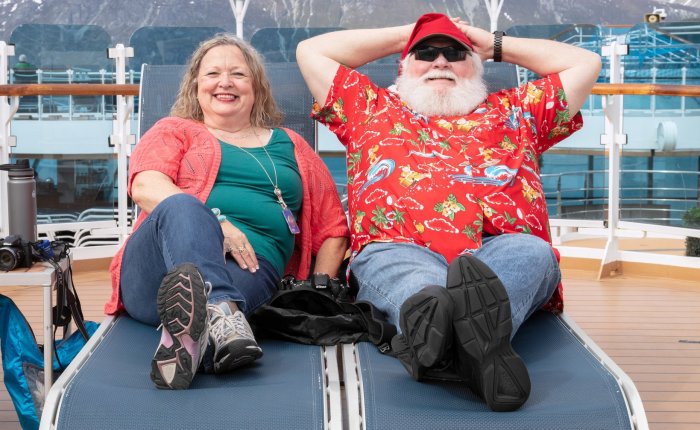 A recent piece in the New York Times profiles a Santa Claus retreat on a Royal Princess Cruise to Alaska . The piece, “When Santa Goes On Vacation”, is part of the Times’ series, “Surfacing”, a column that attends to the intersection of art and life, pretty heady stuff one would suppose, but then, recent articles have examined the last two Dance Dance Revolution machines in New York and the positive effect of slime as an antidote to stress caused by overactive involvement with social media.

In any case, a reporter Aaron Reiss, and a photographer, Chris Maggio, tagged along as the Santas convened for both business and pleasure. Workshops (?) included instruction on where to place hands while placing humans on Santa’s lap, a slightly disturbing area of concern in that some of these Santas have been been hands-on for more than thirty years. These are what is known in the trade as “real bearded” Santas, men who essentially play the part throughout the year. They take their profession seriously, referring to themselves as Santa Bob or Santa Bill as one might introduce Dr. Harris or Professor Plum.

Not a bad boondoggle for Reiss and Maggio, but intersection of art and life?

My concern, of course, is that get-away cruising can only begin to contend with the terrible burden these Santas must carry in the aftermath of a long holiday season in which they experience the full range of human longing. Santa is not a mailbox into which one shouts a list of must-have goodies; Santa is the embodiment of all that is good and kind and generous in a world that is rarely good or kind or generous. I don’t know what the statistics show with regard to the emotional intensity of Santa encounters, but I’m going out on a limb (Douglas Fir) in identifying commonly occuring issues for the real bearded, professional Santa

Enough. Without consideration of whatever might be happening in Santa’s own personal life, the odds are that by December 26th, our man in red is ready for more than a ten-day cruise on a Princess liner.

I have a friend, a hypnotist, who plies his mesmerizing trade on ocean liners. He does two shows a day, feeds at the brimming trough liners present, and sees much of the world. Hypnotists, singers, ventriloquists, impressionists. Why not a therapist? Two-a-day sessions, one Santa at a time, and maybe some of these holiday heroes return restored and ready to place their hands in entirely appropriate fashion as summer melts to fall.