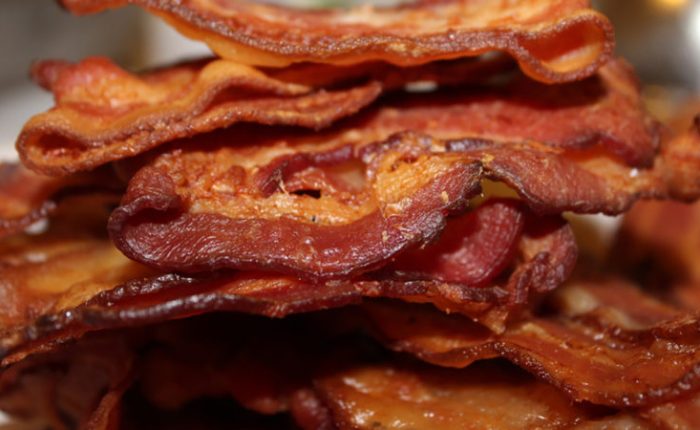 Just scrolling around, reading urgent nation-threatening stories from the Washington Post when the article on NATO was interrupted by a quarter page picture of bacon, the announcement, “Free Bacon For Life”, and the invitation to do whatever would happen were I to actually cick on the banner.

I don’t eat bacon or anything taken from or derived from mammals, observing that when I look in my dogs’ eyes, I see someone in there. The which is actually beside the point, as even if I were able to justify eating a slice of pig, one of the most intelligent of mammals, I’d really only need so much. And, there’s something about being attached to an endless supply of bacon for a lifetime that strikes me as oppressive.

“Honey, the bacon truck is here. Did you hose down the bacon vat?”

Once upon a time in a kingdom far, far away, I did enter an All-You-Care-To-Eat establishment, let’s call it The Captain’s Trough, a spacious establishment with the aforementioned trough running the length of the building. There are many issues at play in considering a dining option that promotes itself as a tribute to gluttony, the most unexpected of which is the mechanism by which the “food” is replenished. I’ll return to the actual “menu” and the actual “diners”, but it was in observing the teams assigned to the replenishment of the various tubs that I understood the scale of operations such as these. The runners (and they were moving!) sped from the kitchen to the groaning board pushing carts laden with comestibles defying description. Mashed potatoes, boiled cauliflower, sticky rice, Clamlike-chowder, the mixed vegetable medley, the lamb curry, the chicken curry, the gravy – all indistinguishable. Good news! The Pork entrees (B-B-Que Pork, Pork Choplets, The Ginger Pork, Chinese spareribs, and ham) were all fire engine red. Easy to spot. The chicken entrees, similarly color coded, were chartreuse, the beef dishes a coffee brown.

Once off-loaded, the steaming trays were quickly emptied then filled again. Did the same patrons return more than once, I wondered? Indeed they did. And again. Here too, my attention was hijacked by the same eager crew hit the tables, scooping up dishes as they emptied, clearing space, not allowing the feeders diners to rush the trough with plates dripping with the remains of the previous foray. The diners stood, the crew swept in, clearing and wiping, preparing the table for the next round.

I ought to find an illustrative photo to accompany this piece as words alone cannot convey the distance between recognizable and familiar protein and the approximation sitting in their approximated sauces. Some came closer as they were bound to a bone of some sort, but even I, no student of chicken anatomy, knew these bones were of a different species.

The trough, as I suggest, was unguarded, as was the chocolate fountain and the dessert bar, but drink were charged separately, and the establishment’s signature yeast rolls were parcelled out with a keen eye on each tray. The replenshing crew feigned ignorance when asked for another basket. “Huh! Rolls? I’ll ask in the kitchen.” This subterfuge raised a question that ought to have come to mind much earlier. “If the cost of providing rolls is a limiting factor in generating profit, how inexpensively has this chicken broccoli surprise been tossed together?”

Best not to ask the unanswerable question.

To return to the provocation of this reflection, I do wonder exactly how this Bacon-For-Life thing works, and thus the quandry. In order to find out what this offer actually entails, I have to click on the banner, and with that action a chain of events is launched, immediately out of my control. Not only do I place myself on the this-guy-is-nuts-about-bacon data base, I am tagged forever as a consumer eager to buy and buy again, as long as the product is offered in bulk … and for a lifetime.

Some things are best left to conjecture. The mind wanders through a labyrinth of untended thoughts, now tinged with the aroma of soggy bacon.