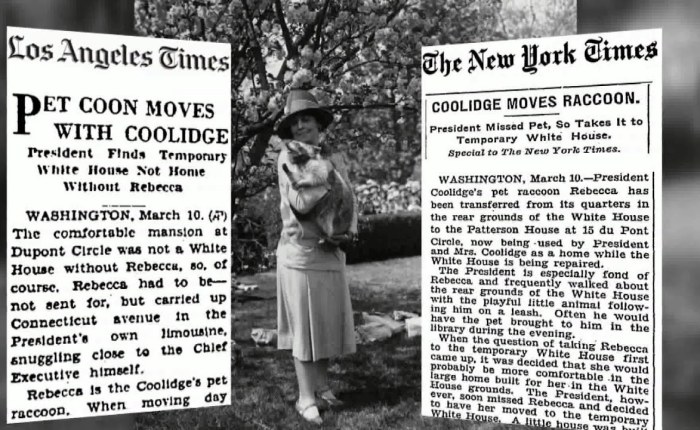 It all started when I discovered that Donald J. Trump, James K. Polk, and Andrew Johnson were the only presidents whose time in the White House was spent without the comfort of a pet of any sort. “Yow”, I said, suddenly aware of the lack of attention I had given pet ownership in reviewing the history in the United States. Interesting to note in passing that two of the three were impeached twice.

“Who doesn’t have a pet?” quickly gave way to a superficial swan dive into the meticulous records of pets in the White House, wherein I was stunned to find that one of the most pet-centered presidents was the otherwise infrequently mentioned Calvin Coolidge. This is not the forum in which to debate his legacy, but it does seem appropriate to make reference to his public persona. Widely known as “Silent Cal”, Coolidge was said to be “…silent in five languages.” Jokes about his lack of animation and taciturn delivery when forced to speak probably arose from Coolidge’s discomfort with the trappings of celebrity inevitably attached to the office of the presidency. When asked why he attended state dinners, Coolidge responded, “Got to eat somewhere.”

Alice Longworth Roosevelt described Coolidge as having been, “weaned on a pickle.” When Coolidge died in 1933, the acerbic wit, Dorothy Parker, replied, “How can they tell?”

That’s the Coolidge I expected to find, but the first mention of a Coolidge pet describes the President walking a racoon on a leash every morning during his term in office. That alone would put Silent Cal in the Pet Owner Hall of Fame, but the racoon was but one of the menagerie that accompanied Coolidge during his presidency and in his four years of retirement.

We’re not going to get into the fine points of pet ownership, but the Founding Fathers had horses, of course, horses being the mode of transportation and most had dogs. Horses may have been necessary, but Washington named one of his his horses “Sweetlips” indicating fondness that went beyond utility. Of course, we named our Dodge station wagon “Harley” so …

Jefferson is but one of the presidents to have owned bears, two grizzly cubs, but the most lethal of his pets was a ram which purportedly killed a child. John Quincy Adams is reputed to have had the highest IQ of any president, spoke eight languages, and was socially awkward. He barely qualifies as a pet owner as his wife kept silkworms, and his short stewardship of an alligator could well be apocryphal. It was no surprise to find that Andrew Jackson rased fighting cocks, but deliciously unexpected was the account of his parrot’s flood of obscenities during Jackson’s funeral.

Coming soon, but, and I was about to say, “the elephant in the room”, is the nation’s larger than life naturalist, cowboy, historian, Rough Rider, pugilist, and president, Theodore Roosevelt. Among the 5,013 mammals, 4,453 birds, and 2,322 reptiles that Roosevelt brought back from his Smithsonian Expedition of 1909 was an elephant, one of eight elephants currently on display in the American Museum of Natural History. We’ve all seen the photograph of Roosevelt riding a moose, I assume. A blinking moose! Living creatures sharing his home included the usual panoply of dogs and cats, a badger, hens, an owl, pigs, a laughing hyena, and a bear named Jonathan Edwards, after one of Mrs. Roosevelt’s ancestors.

That’s a tough collection to match, and one would assume that its counterparts would be found in the roughest and toughest of presidencies.

Adages abound – “Don’t judge a book by its cover”, “Don’t judge a person by the chapter you walk in on,” “All that is gold does not glitter,” and so on. Cal and I would have disagreed on almost every aspect of government, but anybody who walks a racoon?