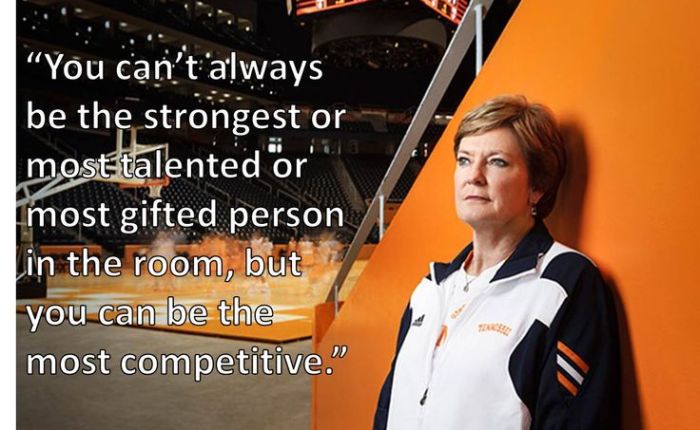 Pat Summit died this week at the age of 64 after a long fight with Alzheimer’s Disease.  She began her career as a college athlete before the introduction of Title IX, playing for the University of Tennessee – Martin and on the first Olympic Women’s basketball team.  As a coach, primarily at the University of Tennessee, Pat Summitt won 1,098 games, eight national championships, and an Olympic gold medal in 2004.  She was inducted into the Naismith Basketball Hall of Fame, named the Basketball Coach of the Century in 2000, received the Presidential Medal of Freedom in 2012 and the Arthur Ashe Courage Award in the same year.

She never had a losing season.

Pat Summitt was tough and bred toughness in her players.  Many of them pay tribute to her on this excellent overview of her career:   http://espn.go.com/core/womens-basketball/

For those of us who watched the Lady Vols play basketball at the highest level, watched Tennessee battle powerful Louisiana Tech and Baylor, and begin a heated rivalry with the University of Connecticut teams coached by Geno Auriemma (Auriemma’s U Conn Huskies have won a combined 108 games with no losses since 2013) , women’s basketball seemed about to explode as one of America’s most-watched sports.  At roughly the same time, America fell in love with Mia Hamm and Brandi Chastain, and later with the current US National Soccer Team, faithfully watching every game of the Women’s World Cup and lining up for subsequent practice matches and exhibitions.

At some point, I’ll indulge in a rant about the importance of Title IX in the evolution of modern athletics; let’s just remember that, facing violent opposition by the men who held control of the event, Katherine Switzer was the first woman to finish the Boston Marathon in 1967, having entered under the name, K.V. Switzer, and that she was attacked on course by a race official who tried to rip the number off her jersey.  1967!  Before Title IX, the principle athletic activities for girls in high school were cheerleading and square dancing.  As a college athlete before Title IX, Pat Summit remembered playing three games in a row at Tennessee Tech in the same sweaty uniforms; they had no money for a change of clothes.  Female Olympic swimming and track athletes came from AAU clubs and associations, not from high school and college programs.

Today’s rant, however, is about the relative insolvency of women’s professional sports in the United States.  The top ranked player in the LGPA, Lydia Ko, pulled down $1,816,738.00 in 2015.  Jordan Spieth, the top PGA golfer in that year, hauled away $53,400,00.00 million in prize money and endorsements.  Serena Williams is the most successful female athlete by far; Williams ranks 40th in the Forbes list of wealthiest athletes with an income of $28,900,00 in 2015.  Who is ahead of her?  Well, Tiger Woods pulled down more than 45 million last year, Joe Flacco more than 44 million.  Tennis player, Kei Nishikori earned more than 33 million.

And tennis and golf are the two most well established of women’s sports.

All of this arrives with my disappointment that so few people are watching top level basketball played in the WNBA, and, that, outside of Portland and Seattle, an equally small number are watching NWSL soccer.

The Portland Thorns lead the league, five points ahead of Chicago and ten ahead of arch-rival Seattle; Portland has five of the national team on their roster, including Meghan Klingenberg, Lindsey Horan, Allie Long, Emily Sonnet, and Tobin Heath.  Everyone’s favorite goal scoring machine, Carly Lloyd plays for the Houston Dash; Hope Solo is goalkeeper for the Seattle Reign.

Meanwhile, the three dominant players on U Conn’s undefeated team, Brianna Stewart (Seattle Storm), Moriah Jefferson (San Antonio Storm), and Morgan Tuck (Connecticut Sun) were the first three picks in the WNBA draft, and the level of play in the WNBA continues to be impressive at both ends of the court.  Ball movement, sharpshooting, and great defense are impressive, as they are in the women’s collegiate game.  Guards Diana Taurasi, Elene Delle Donne (also a dominant forward), and Skylar Diggins direct beautifully choreographed offense, leading fast breaks and passing with sharp accuracy. Forward Maya Moore is Taurasi’s equal on the floor, an outrageously effective shooter, and Candace Parker is still a tough competitor. (Make sure you hear her tribute to her coach,Pat Summitt).   Right now, Brittney Griner is the most respected center in the league, but Briana Stewart is on the way.

Until the Golden State Warriors developed an elegant offense based on ball movement and precise shooting, I pretty much watched only the last two or three minutes of games in the NBA.  Despite a life-long interest in soccer, I tune in and out of most men’s games.  I’m a Tigers fan and watch those games in their entirety (when they get some air time), but drift and out of most other MLB games until the playoffs.  Novak Djokovic is a freak of nature; I’ll watch him play anyone.  I won’t watch most men’s matches with the same fascination.  College football?  NFL?  Red Wings hockey?  Can’t tear me away from the screen, and …

I like watching women’s sports at the highest level.  There is no greater drama at the moment than Serena’s quest for another Grand Slam title, which would tie her with Steffi Graf.  She has a raft of younger rivals, all playing with focus and grit in order to match her power and will.  Pretty great tennis, and the number of young American players starting to climb makes every tournament interesting, no matter who ends up in the final pairing. Women’s soccer makes sense to me as the men’s version does not, perhaps because I am allergic to flopping and endlessly unproductive runs.  I watch the NCAA softball world series because the laws of physics do not permit at least of the three pitches that seem to operate by remote control.

The good news is that with the arrival of the Summer Olympic Games, swimmers, divers, gymnasts, runners, jumpers, rowers, archers, cyclists, volleyball players, equestrians, weightlifters, and rugby will join women playing tennis and soccer.  My only regret is that most Americans will not see the dominant softball players who so overpowered all competition that the game has been removed from the Olympic line-up; maybe in 2028?