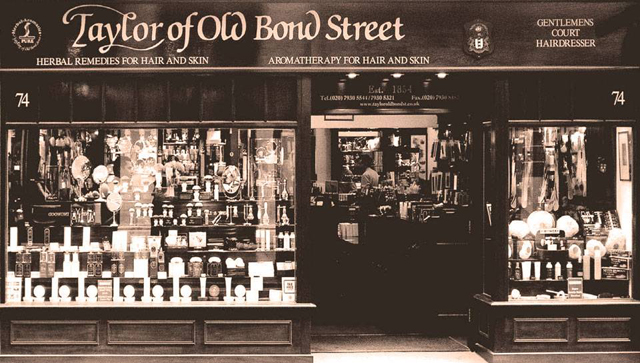 “And what impels him to repeat this process at every single lesson, and, with the same remorseless insistence, to make his pupils copy it without the least alteration? He sticks to this traditional custom because he knows from experience that the preparations for working put him simultaneously in the right frame of mind for creating. The meditative repose in which he performs them gives him that vital loosening and equability of all his powers, that collectedness and presence of mind, without which no right work can be done.”

Eugen Herrigel – Zen and the Art of Archery

I am a creature of habit, I admit; there are those in my family who might suggest that I am a slave to habit, but they fail to understand that the collectedness and presence of mind with which I enter the day is due almost entirely to the rites and rituals with which I begin the day.

I have been shaving for many, many years, but spent the first thirty with no regard for the manner with which I scraped away my daily stubble.  Tedious necessity, I thought, shaking my can of aerosol shaving cream and picking up the flimsy disposable razor.  I had long since abandoned electric shavers as they failed to provide smoothness of cheek, and they made too much noise early in my day.  So, I shaved “wet” with little appreciation of the varieties of apparati available to the discerning shaver.

(N.B.  Grammarians drop gloves over the use of “apparati” as the plural of apparatus.  It’s an odd locution, I know, but, really, any more affected than “campi” to describe more than one campus or “auditoria” in speaking of more than one auditorium?  “Sanitaria”?  If one wild excess is a rumpus, are several “rumpi”?)

As a lad, I was taken with Burma Shave’s  tortured rhymes placed on billboards across the nation.  Actually, the doggerel verses were placed on small boards separated by some distance, so that the auto approaching them read the first line, then the second, then the third, and had to wait a bit for the fourth.

Had to admire the wit and waggery, so used Burma Shave until I became environmentally awake, then scraped away with whatever soapy substance I could find at the local pharmacy.

Emotionally unattached to the standard soaps and devices, I knew I had to cast a wider net. Eager as I was to remain unsullied by website surfing, I nonetheless searched for more satisfactory shaving soaps, buying a ceramic shaving mug and the first of many shaving brushes on-line.  I was still a perfunctory shaver, glad enough to find relatively pleasant shaving soaps, but unmoved by the experience of shaving.  Just a job.  Get it done.  And then …

I stumbled across the line of shaving creams produced by Taylor of Old Bond Street.  Jeremiah Taylor founded the company in 1854, during the reign of Queen Victoria, determined to reflect British understated style and  elegance. I took the plunge, ordering the Eton College College Collection Gentleman’s Shaving Cream Bowl, first produced when Taylor of Bond Street became the official barber of Eton College.  The description of the substance was simply irresistible.

“A beautiful masculine fragrance with dominant citrus lemon notes combined with fruity citrus notes of orange and mandarin. All this is blended with gentle floral notes that rest on a base of warm patchouli. Contains Lemon oil and Patchouli oil.”

All true and the smoothest shave I had ever experienced, but was I satisfied?  No, not by a whisker!  A shaving cream this delicious demanded a far better brush than the hand-me-down I had found at the bottom of a bureau drawer.  Over the years, I found I preferred the Infinity Silvertex Shaving Brush by Kent.  Badgers breathe more easily as this is a synthetic bristle brush, which dries more handsomely than the badger brush, but I have learned that every face and every shaver is different.

Brush in place, Eton College cream almost done, I took a leap of faith and tried the rest of the Taylor line.  Again, each cream has a personality and each sends the shaver into the day with a different sort of embrace.  Eton College Cream is the heart of my shaving routine; I order it as the first in my rotation of three, substituting a few other favorites in turn.

Mr. Taylor’s Cream has (A fresh fougere accord with herbaceous top notes of lavender, bergamot, green notes resting on a heart with geranium and soft green fern.)  I must have missed the herbacious top notes; Mr. Taylor is not in my cream rotation.

Sandalwood (top notes of geranium, lavender, rosemary and liquid amber supported by a heart of carnation, fern and orange blossom resting on a sumptuous base of patchouli, sandalwood, vetivert, powdery musk and rock rose) was perfectly fine, but not a top choice.

The St. James Collection (A fresh masculine fougere opening with bergamot and mandarin intertwined with citrus ozone notes supported by a fruity floral heart resting on a woody amber base) is fresh and somewhat smoother as it lathers, winning a spot in the rotation.

Jermyn Street Shaving Cream Bowl for Sensitive Skin is allergin free and remarkably soothing.  It, too, has a place on the shelf.

My favorite, Grapefruit Shaving Cream, however, is an oddity, hardly recognizable as part of the Bond Street Collections.  In fact, only a true believer can find the product on the Taylor of Old Bond Street site, and there is little of the romance in the prosaic description ( Invigorating Grapefruit Shaving cream creates a uniquely smooth and creamy lather while protecting and moisturising the skin to give a better shave.)  Ho Hum, and yet … neck and neck (as it were) with Eton College, in part because it makes the bathroom smell delicious throughout the day, and in part because it brings just a soupcon of zest to the shaving adventure.

I’m less fussy about razors, pretty much sticking with those that have the heft and balance to allow the elaborate choreography of my three-zone shaving.  My current safety razor is the Merkur, standard length.  I have done considerable comparison of blades, however, going so far as to order blades sharpened by nameless blade mechanics in Bangkok before settling on Astra Superior Platinum Double Edge Razor Blades, made in Russia.  I bought 100 blades three years ago and have thirty five left; they remain sharp for more than a month’s daily shaving.  Of course, I also use one of Harry’s fifteen dollar razors and their cartridge blades ($2.00 each) for the final pass, expecting each cartridge to last  about a month-and-a-half.  I’d buy Harry’s products even if the blades were less impressive; they have the most handsome packaging in the retail shaving world.

Products aside, the real value of the morning’s routine is in sinking into each stage of preparation and application.  Many experts suggest showering before shaving; my brother shaves WHILE shaving.  I don’t like the hot towel wrap (claustrophobic), but I do use two steaming hand towels and a brush that has been sitting in steaming water. A quick swirl brings cream to brush, circular massage, lather to cheeks.  Swipe once chin, next upper lip.  Shave with the grain, cheeks, lather and shave against the grain, neck , lather and shave from left to right on the chin.

No need for moisturizers or lotions; I’ll have the trace scent of the shaving cream with me, even after I shower, and no chance of dryness through the day.

Is this Ikebana, the Tea Ceremony, or the Japanese Bathing Ritual?  Probably not, but at least it is not seppuku.  I should note, however, that I keep an alum block on the presentation towel where lie the razors and  the brush.  The more commonly used styptic stick is a flimsy and less effective corrective to a loss of concentration.  It is the concentration, after all, that brings collectedness and presence of mind, the zen of shaving.