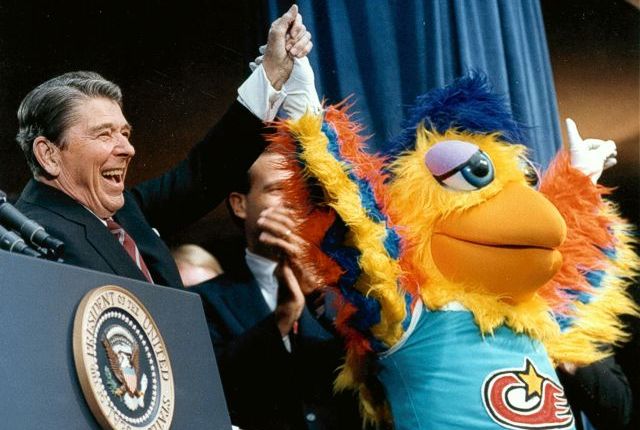 After more than 5000 performances, 510 in a row for the San Diego Padres, Ted Giannoulas is hanging up his beak.  Giannoulas first put on the feathers in 1974 as a stunt sponsored by a San Diego radio station; his first gig was handing out Easter eggs to kids at the San Diego Zoo.  From that humble beginning Giannoulas created a mascot that has earned a spot in the pantheon of great mascots, to many observers, the greatest mascot of all time.  Baseball fans in San Diego count The Chicken as their own, and his work with the Padres established him as the capon crusader, but almost from the start, he also supported the Clippers who then played in San Diego.

The San Diego Chicken evolved into the Famous Chicken when Giannoulas fled the coop, taking his show on the road.  At this point, he’s flown more than a million miles, and, boy, are his arms tired.

As a student and sports fan at San Diego State, Ted Giannoulas wanted to bring fans of all ages a way to enjoy a game, particularly during the “down” moments, between innings or before the first pitch.  Mascoting is a rare art; few are able to bring a costumed character truly to life.  Ted Giannoulas was a star from the start, almost immediately winning the hearts and minds of San Diego’s fans.  So devoted were San Diegans to Giannoulas’ Chicken that they massed in protest when KGB radio fired Giannoulas in 1979.  In what must have been a virtual barbecue, fans loudly booed the replacement pullet, driving him to defeat and obscurity.

Once restored to his rightful place in the pecking order of mascots, Giannoulas kicked his performance into an even higher level of confrontive gymnastics.  In describing his oeuvre, Ted Giannoulas is quick to assure his fans that he has been the only performer in that suit since his restoration in 1979.  He admits that he can no longer do the splits as he once did as a spring chicken, but says he stills starts down until he collapses, adding yet another piece of schtick to the aging chicken’s routine.

I’ve seen The Famous Chicken in ballparks from coast to coast, and have had the particular pleasure of seeing Giannoulas take on other mascots in almost every setting; they simply do not have a chance.  With his customary brio, The Chicken approaches his foe with a deliberate and challenging heavy step.  A flick of the wing invites battle:  Bring It On, Lehigh Valley Pig Iron!  Whatcha Got, Modesto Nuts?  Hey, Topeka Train Robbers, I Gotta Whole Lotta Sumpin’ For You!

I lived in Huntsville, Alabama, home of the Huntsville Stars, during Michael Jordan’s break from basketball.  When he and the Birmingham Barons came to town, it was on, even though the teams’ mascots were unprepossessing.  Their lame mascot, “Babe Ruff” looked like a Pound Puppy on Welfare.  The Stars weren’t much better; “Homer, the Pole Cat” was as significantly shabby.  At that time, the Stars were the A’s Double A franchise in the Southern League having recently sent Jose Canseco up to the majors after an MVP season in Huntsville.  Jordan was the main attraction, of course, and the games were sold out, but the mascot battle paled next to the stunning display of Jordan’s largesse in providing his team a luxury bus so they could travel in comfort and style during the steamy southern summer.  The bus cost Jordan $350,000.00 and can be yours at auction with an opening price of $20,000.00.  At the time, however, it was a thing of wonder, and many fans missed the first innings walking around the bus in the parking lot.

In  addition to the Barons, the League did present some notable franchises and notable mascots.  The Tennessee Smokies had colorful mascots, Homer, Slugger, and Diamond (really); The three bear”ish” things were actually more garish than colorful, kelly green, navy blue, and mango.  The Montgomery Biscuits, however, provided built-in drama.  Monty the Biscuit was chased by Big Mo a biscuit-hungry … thing.  The big news from Montgomery is that, while Mo stays, Monty has been replaced by a miniature pot-belly pig entitled, The Duchess of Pork.

The Chicken was henpecked in court following a series of ill-advised match-ups, one of which I was privileged to witness.  My kids had been entranced by Barney, the much beloved (by them) purple dinosaur, but fortunately had just outgrown their allegiance as we attended our last game in Huntsville.  The Memphis Chicks were in transition, finishing their relationship with the Royals and just about to become an affiliate of the soon-to-be defuncted Expos.  As a result, their mascot was AWOL, and a good thing too, as Blooper,  had been designed when the Chicks were the Chickasaws (nice).  As noted, Homer the Polecat was not an impressive specimen, so spent most of the game walking through the crowd, looking for some sort of validation.  The main event, therefore, was a tussle between something that looked an awful lot like Barney and The Famous Chicken.

It probably goes without saying that Barney took a beating from one side of the diamond to the other.  My kids still talk about the chicken scissor kick that propelled Barney into the Chicks’ dugout.  Whoever was in the Purple suit did a good job of feigning injury, although I’m pretty sure I heard him pleading, “No mas, no mas”.

What do I say to a chicken that is one of my children’s happiest memories?

Thank you, Ted Giannoulas, and I hope you’ve put away a nest egg commensurate with your contribution to the great game of baseball.