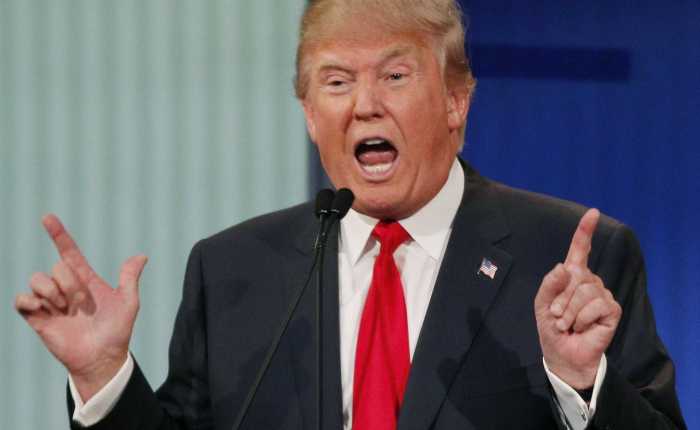 After lengthy consultation with his campaign staffers and conspiracy theorist, Alex Jones, candidate Donald Trump has determined to provide more concentrated and efficient policy statements by simply responding to questions with adjectives, adverbs, and injunctions.

“We killed ’em in the forum with adjectives!  Decimated, remember “decimated”?  That’s such a big word!”  This observation by a highly placed staffer in the Trump campaign organization is at the heart of the repurposed syntax of a candidate with big ideas to present to the American people in the few weeks left before the election.

How would this initiative work?

Although Mike Pence, candidate for Vice President, felt it might not have the ring of a truly Reagan-esque performance, Jones supplied the following scenario as most plausible, :

A lingering shot of Hillary Clinton’s portable bed and wheelchair back stage, at the ready to carry the Democratic candidate back to the pod from which the Lizard Overlords have released her as part of the scheme to claim Planet Earth, as the faked Sandy Hook shootings, faked moon landing, faked Oklahoma City bombings, and faked 9/11 have not yet brought an unsuspecting public to its knees.

A hand-picked interviewer (Ann Coulter?) tosses a single name at Trump who then is free to pack more invective per minute than is currently possible.

His Plan to Defeat Isis?

Critics may complain that Trump’s pronouncements continue to lack specificity, but the campaign feels the new initiative packs a punch and drives home the candidate’s extraordinary insight and energy.