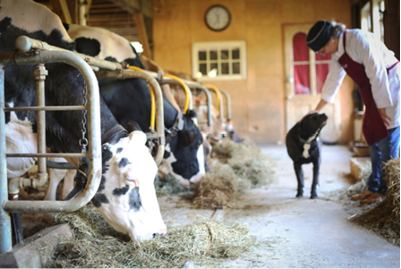 I’ve asked trusted friends and relatives to pass on subjects they’d like to see me take on, and, while more than a few are unspeakably inappropriate, I have built up a nice collection of go-to titles, each of which is large enough or general enough to allow me to ramble unimpeded by the need for particular knowledge or, for that matter, facts of any kind. Fortunately, my sister-in-law opened a treasure trove of single word titles, including this one, on ambience.

You might expect that an article on ambience might reasonably consider those elements of space or structure surrounding us that elicit distinguishable feelings or emotions.

Jarring transition?  Hold on to your Holsteins because I’ve been aching to give cows attention too long overdue.

The pilgrimage that has changed my view of the world, however, was the trek to Thorncrest Farm in Goshen, Connecticut, home of the best chocolate the world has ever seen.  That is not just my opinion, by the way; the author of a guide to fine dining in Connecticut as published in Connecticut Magazine said, well, what I said, roughly.

The reader is perhaps familiar with terms such as single-malt in reference to the finest whiskey, artisanal in reference to fine comestibles, from cheese to beer.  Thorncrest Farm offers … fine artisanal “Single Cow Origin” chocolates, the foundation of which is their signature milk.

The identification of the Single Cow Origin is not mere hucksterism; each piece of chocolate is made from the milk of a single cow, and the properties and nuances of each cow’s signature milk are matched with the sorts of chocolates to be made.  The milk of each individual cow is available for purchase at the Farm, should a visitor care to develop the sort of “nose” one needs to become a true lactophile.

With absolutely no understanding of the choice I made, I stumbled into a realm of caramel fashioned with milk and cream donated (no coercion here) by “Daydream”.  I chose Daydream’s Butter and Sea Salt Caramel,  a confection described by Thorncrest:

Daydream’s fresh cream, butter and milk  are carefully blended together to create these one of a kind caramels.  The Sea Salt Butter Caramels have a splash of sea salt on top for an ultimate flavor sensation of salty, sweet, buttery lusciousness.

They aren’t lying, and you can see they take chocolate seriously, which means they also take the care and well-being of their Single Origin cows very seriously. It is the ambience (see?) of barn life at Thorncrest that will occupy much of the remainder of this piece, but in order to understand the relationship between artisan and cow, you will need this description of how it happened that Daydream became the cow of caramels.

When a young heifer who we call “Daydream” ( a daughter of Sweet Dream)  calved and began to produce milk. “Daydream” already had her place in the history of Thorncrest having been shown for two consecutive years and remaining undefeated. Soon after entering production, on a early summer morning as Clint and I milked the herd, I took “Daydreams” milk pail and commented on the pure buttery color of her nights work. It is best described as an ivory buttery tone and a purity all its own. I immediately turned to Clint and said, “Caramel”. I quickly excused myself from the morning milking and went right to the creamery with “Daydreams” milk.

The first principle in nurturing their cows so as to produce the finest cream and milk is in making sure they are free of stress.  As the farm’s owners and chocolatiers, Clint and Kimberly Thorn, described the efforts that go into assuring that each cow’s day is purely magical, my view of cows, milk, cream, and chocolate were forever changed.

The barn (this shabby term does not even come close to what the structure actually offers) is open to the public from 10:00 am until 4:00 pm, allowing visitors to meet the cow that provided the blend used in the chocolates they enjoy.  No visitors during the milking, however… might be stressful.

About the barn.  The Thorns constructed this immaculate haven in order to provide the most stress-free and comfortable experience a cow could imagine.  They observed feng shui, having the cows’ heads or tails aligned perfectly with the earth’s magnetic field so that they are facing either east or west, whereas the huge barn doors at either end of the barn are oriented north-south.  Among the pleasures of the arrangement is the cross-breeze that not only circulates, but which rises from under the cow and up into the barn’s rafters.

Upon returning to the barn from the pasture, the cows are fed hay that has been harvested from the farm’s field and tended with natural compost; no herbicides, pesticides, or fertilizers touch Thorncrest hay.  Each cow is milked into an individual bucket, and within fifty seconds of the milking, that milk is carried by pail, poured into a gravitational system so that the milk is never pumped or bruised, and then is gently and slowly pasteurized.

There is a downside to the process, as I suspect the ardent cow lover will have anticipated.  The unique “Zesty Lime and licorice” chocolate, for example,  can only be made with the milk of one cow, Queenie, and that means that should Queenie not be available for milking, no zesty lime and licorice.  Long live Queenie!

Quite aside from the meticulous care with which this extraordinary chocolate is created, there is something to be said in recognizing that stress has its consequences, and it is in that sense that ambience is most properly considered.  The Thorns labor with love and the result is astounding. Love doesn’t always involve tails facing east and west, but it seems to have something to do with noticing what brings comforting alignment.

I’ve spent some time romanticizing this day with cows, and I am aware that they are not frequently seen as belonging to the highest order of mammals.  As a possible corrective to the misunderstanding of the range of emotion available to cows, I am attaching a short video at the bottom of this article.  Cows released from the barn in the spring frolic with an abandon I should like to experience.

I don’t eat mammals, in part because the scene I pass along convinces me that we are related, cows, pigs, dolphins, dogs and I.  Mark Twain suggested that, “Man is the only animal that blushes … or needs to.”, and I can’t contest the observation, but my opinion is that an animal capable of joy shares something important with me.