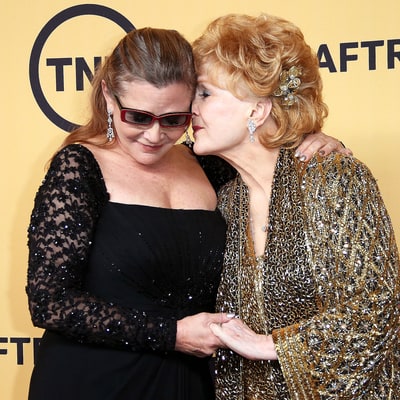 Debbie Reynolds was America’s Sweetheart from the moment she appeared in Singin’ In The Rain as a fresh-faced aspiring singer and dancer, more than holding her own with Gene Kelly and Donald O’Connor in what most critics think was the best movie musical ever made. She was just eighteen when she was cast in the film, an accomplished gymnast but not a dancer.  Fortunately, Fred Astaire saw her potential and brought her along quickly enough that her performance in the film is flawless.  In the course of a long career, she made some other good films (The Affairs of Dobie Gillis, The Tender Trap, Tammy and the Bachelor, The Unsinkable Molly Brown, Divorce American Style), and some less-than-good films (The Singing Nun, What’s the Matter With Helen?).  She is the voice of Charlotte in Charlotte’s Web and Splendora Agatha “Aggie” Cromwell in Halloweentown and both Halloweentown sequels  Seemingly unaffected by time and circumstance, Reynolds remained an accomplished singer and dancer, recording pop hits in the 1950’s and 1960’s, and assembling a series of successful Las Vegas revues, performing until she suffered a series of strokes in the past year.

She was a talented entertainer, but what set Debbie Reynolds apart from the stars and starlets of her generation was her uncomplicated good sense, sharp wit, and authentic kindness.  She was the person she seemed to be, maybe a bit tougher than we thought a sunny girl scout could be, maybe possessed of a slightly more wicked sense of humor than we expected to find, but grounded and grateful for the opportunity to do the work she loved. To the delight of an adoring public, she married a slick pop crooner, Eddie Fisher, whose greatest success came with the hit single, “Oh My Papa”, absolutely as maudlin and saccharine as one might fear.  The fan magazines adored the couple, showering attention on Reynolds as she added her children to the family.  Behind the scenes,however, Eddie had taken up with Debbie’s close friend, Elizabeth Taylor.  The sultry Taylor had three marriages in her rear view mirror, including the last, to Michael Todd, at which Debbie Reynolds had been Taylor’s bridesmaid.  When Todd was killed in a plane crash, Eddie, an equally close friend, offered the sort of comfort any grieving widow might expect from a slick crooner, abandoning Debbie and the children and becoming Taylor’s fourth husband.  Taylor would go on to have eight marriages to seven husbands (she married Richard Burton twice) and to reconnect with Debbie Reynolds, becoming a close friend again at the end of her life.

The the very public affair and very public divorce filled the pages of the fan magazines for more than a year, during which time Debbie Reynolds managed to care for her children, return to her career, and remain above the fray.  The public might have hoped for vitriol, but Reynolds had not gone Hollywood; despite her early success, she remained principled and self-possessed.  As she would in later years, as her daughter Carrie fell into a cycle of destructive behavior, Reynolds summoned caustic wisdom, unexpected perspective in a celebrated performer.   As one columnist put it, “She was more steel than magnolia.”

The Carrie Fisher story included detailed descriptions of a life out-of-control, including the admission that she could include Harrison Ford in her catalog of illicit relationships.  Reynolds response?  “Why all the fuss about Carrie’s admitting she had an affair with Harrison Ford? I have to admit I slept with her father!”  Carrie Fisher’s The Princess Diarist and much of  Wishful Drinking, Postcards from the Edge, and Shockaholic document her battle with bipolar disorder, substance abuse, catastrophic relationships, her weight, and self-image, written with the same self-aware, deflective  humor  her mother had perfected.  Carrie’s appearance was the subject of a number of disparaging articles, and although she attempted to shrug off the charge that she had aged less gracefully than her mother, the taunts bothered both of them.  In roasting George Lucas, Carrie Fisher touched on the complicated legacy of having played Princess Leia, a hypersexualized royal in the first Star Wars cycle, suggesting that her proclivity toward things excessive derived from the role.  “… like any abused child wearing a metal bikini, chained to a giant slug about to die, I keep coming back for more.”

Debbie Reynolds was close to Carrie throughout the most difficult trials, as Carrie went through electroconvulsive therapy  treatments, “blowing out the cement in my brain” as Carrie put it.  Both women spoke openly and forcefully about their own struggles and both were widely admired.  “I want to be with Carrie,” Reynolds said upon learning of her daughter’s death.  The rare mutual regard between mother and daughter is the subject of a documentary airing on HBO in the coming months.

Equally rare is the objectivity with which these two women viewed their own careers and their lives.  Let’s start by agreeing that both fame and celebrity take a toll.  There’s no real baseline, I suppose, to present the case that Marilyn Monroe, Charlie Sheen, Macaulay Culkin, Corey Feldman, Amanda Bynes, the Kardashians, or anyone on Dr. Drew’s patient list might have enjoyed a robust and fulfilling life if not ravaged by life in the public eye; statistics suggest that the majority of families devastated by addiction and self-destructive compulsion are ordinary people.  If not for social media, the dreadful lives of afflicted ordinary people would remain undocumented, while the intimate and sordid detail of “life” among the celebrated is grist for the tabloid mill.

Some are born famous (Prince Harry), some achieve fame (Winston Churchill, Tiger Woods), and some have fame thrust upon them (Paris Hilton, Snooki Polizzi).  The last are celebrities;  celebrities, of course, are famous for being famous;  There seems to be something in our culture that raises otherwise undistinguished personalities to celebrated heights only to more fully relish their inevitable decline and fall.  Paparazzi exist in order to feed the beast, pulling us well past the boundaries of civility, hiding in bushes to catch them sunbathing, canoodling promiscuously,  mistreating their children.

They age, gain weight, lose hair; they disgust their fans. I have yet to buy one of the magazines that shouts the appalling news “Look who is too fat to wear a bathing suit!” Somebody does, it appears, as a new bloated body is shamed week after week in check-out lines across the country.  That is the sort of assault that Carrie Fisher withstood and one that Kelly Clarkson, Val Kilmer, Jessica Simpson,  Kirstie Alley, Kathleen Turner have all endured.  An entire segment of the publishing world is given to the flaying of those we once found attractive, an impulse particularly obscene when the object of vilification is a person, usually a woman, whose appearance has been altered by illness.  Rita Hayworth was “the love goddess”, the most popular pin-up girl during World War II.  In late-stage alcoholism and suffering from Alzheimer’s Disease, she was far from glamorous; photos published at the end of her life were intended to mock her for having become unlovely.

Watch Bright Lights: Starring Carrie Fisher and Debbie Reynolds if you can.  HBO has pushed the debut forward to January 7th; reviews from screenings at the Cannes Film Festival are excellent.  The producer describes the project as one that Debbie wanted to do for Carrie and one that Carrie wanted to do for Debbie.

“It’s life with Carrie and Debbie. It’s about both of them trying to stand upright, both having their frailties — age on the one hand and mental illness on the other. It’s a love story about a mother and daughter — they happen to be Carrie and Debbie,”