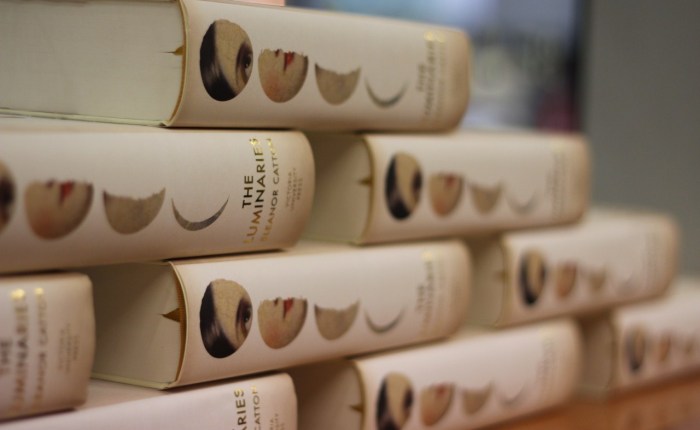 I used to think I wanted to be a writer.  I love words, love to play with language.  I’m whimsical and occasionally thoughtful.  And, there’s the word thing – love ’em.

But … and this has been clear to me for quite a while, I’m not much of a story-teller. Not so great with characterization either.  So, when I read three original novels in the last few weeks, each packed with gripping narrative pull, vivid characterization, and brain-bending structure, I just erased the limp,vapid, obvious first draft of a very conventional novel and sat down to read in admiration.  It happens that both authors (Eleanor Catton and Jennifer Egan) are women who have won major awards, but they have come to prominence in the years since I last held students hostage in a classroom.

“Where are women in our curriculum?”  It’s a more than fair question and one that appeared weekly as the English Department met to sort out other less momentous affairs such as the determination of the angle at which classroom projectors were to be mounted.  Personalities largely overwhelmed principles in these discussions, so much so that I recall slipping into what I call my thousand yard stare.

I loathe meetings in virtually any setting and to almost every purpose which says more about me than about meetings or their purposes.  Here are the some of the weaknesses of my character that emerge in meetings:  pettiness, impatience, self-aggrandizement, sloth, an inclination to gossip, incessant fiddling, irresponsible doodling, and the ever-present temptation to play class clown, and many, many more.

All of which came to play as I sat listening to good-hearted people argue that the classics we taught were inherently valuable and other good hearted people argue that the canon did not include voices that ought to be heard.  At the time, I taught Shakespeare and Homer, the Brontes, Virginia Woolf, Louise Erdrich and Jane Austen.  My electives gave me room to introduce Shirley Jackson, Flannery O’Connor, Kelly Link, Heidi Julavits, Alison Bechdel, Zadie Smith, Kiran Desai, Patricia Highsmith, Molly Gloss, Jhumpa Lahiri, and Margaret Atwood, but there was a large and wonderful world of astounding books written by women that I had yet to discover.

Having left the classroom, free to read anything I like, I continued to read my favorites and happily stumbled into the realization that we live in a golden age of literature written by women, so happily that for the most part, I’ve read nothing but fiction written by astounding female authors.  I did lose a few months getting  through Infinite Jest, but quickly returned to reading authors I had not known.

I’ve written elsewhere about Emily St. John’s Station Eleven, the most moving and probably prescient dystopian novel I know, and I’ve filled pages in tribute to Louise Erdrich, starting with my appreciation of Blood Medicine and continuing with my fascination with the entire connected series of books following Love Medicine, from Tracks to The Painted Drum.  Margaret Atwood is back in favor as The Handmaid’s Tale has arrived on-screen, but inventive novels such as The Blind Assassin and Alias Grace are far less widely read than they ought to be, especially as The Blind Assassin won the Mann Booker Prize in 2000 and is one of the 100 best novels identified by Time Magazine.  Atwood defies description, writing within and beyond genre. I found her short story, “Death by Landscape”, just dark enough, just clouded enough to use with my honors sophomores.  They puzzled at the right level of uncertainty.

I’ve also written about Heidi Julavits, an author I admire so completely that I follow her on Instagram, hoping I’ll find she’s written another novel.  She’s busy, I know, editing The Believer Magazine and teaching at Columbia, but the The Uses of Enchantment came out in 2006 and The Vanishers in 2012, and I am growing restive.  Donna Tartt hit pay dirt with The Goldfinch, but Tartties (that may not be a real thing) are longing for a darker, quirkier, novel similar to her Secret History.  She is also a deliberate writer, having taken ten years between novels.

This article emerges, however, because  I’ve been locked in a dark room with Jennifer Egan and Eleanor Catton, well, with their work.  Each has written books that confound description.  Janet Maslin’s review of Egan’s A Visit From the Goon Squad attempted to evoke a sense of the novel:  “…spiky, shape-shifting … tough … uncategorizable.”

“Enter the New Zealander Eleanor Catton, stage left, delivering a wildly brilliant and precocious first novel (she’s in her mid-20s) that’s not easy to describe. Nonlinear and occasionally tricky to follow, it’s a series of plays within plays; and as in a piece of experimental theater, its characters often break mid-dialogue to confess in startlingly honest asides or snatch at one another’s thoughts, with lighting and music added during moments of high drama or hushed intimacy. The play’s not just the thing, it’s everything.”

Catton followed up The Rehearsal with The Luminaries, the novel that won her the Mann Booker Prize at the age of 28.  Equally indescribable and equally inventive in structure, The Luminaries reflects Catton’s fondness for tales of action and adventure, for Philip Pullman, Robert Louis Stevenson, and Avi, authors who so entranced her that she knew she was meant to be a writer.  So, rollicking and thick with historical texture, teeming with vivid characters, the novel is more than impressive enough at eight hundred and twenty two pages of scams, confidence schemes, puzzle and mystery set in the gold fields of mid Nineteenth Century New Zealand.  And then … as Catton describes the genesis of the book:

“This phase of reading and researching lasted for nearly two years, but it wasn’t until the very end of it that the idea for the novel was really born. As a lark I had been learning to read Tarot cards, and I chanced on a copy of Italo Calvino’s The Castle of Crossed Destinies, the plot of which is patterned on a Tarot spread. I found the book a terrible struggle, despite it being very slim, and, while struggling through it, I wondered why it was that novels of high structural complexity were so often inert, and why it was that structural patterning so often stood in the way of the reader’s entertainment and pleasure. Did structure have to come at the expense of plot? Or could it be possible for a novel to be structurally ornate and actively plotted at the same time? I thought about the novel that I wished The Castle of Crossed Destinies had been – and this, at last, was my negative-charge influence, defiant rather than imitative, longed-for rather than loved.”

Negative-charged, defiant, rife with crossed destinies, supported by extensive astrological charting, packed with shipwrecks, gold fever, Chinese murders, a delicious array of dialects, and intricate plotting, all eight hundred pages flew by.  The hallmark of an exceptional book is that I envy those who read it from the first time, and this is one I intend to pick up again, reading it again as if I had no idea how this marvelous Tarot clockwork will inevitably pull me into many, many lost hours again.

I may not have the classroom I once knew, but I can offer an adult ed course in something like, “Wait!  You haven’t read these authors?”  We’ll see who signs up.