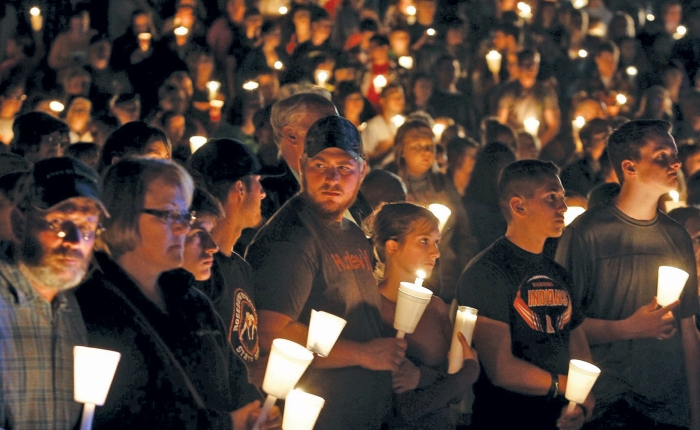 The United States of America is more violent than three-quarters of established nation states.  If we still had a functioning Department of State, we would be cautioned against visiting … us.

I started to write about gun violence, mass shootings, the hideous parade of innocents slaughtered by madmen, but what is there left to say?

Are we crazier than other nations?  It’s hard to tell because so many guns, and by guns I mean weapons of mass extinction, are so widely literally at hand that the same number of chaotically disordered people, and by people I mean men, might be ravaging yoga studios and school yards in Canada.

But I don’t think so.

The culture itself is deranged, spinning out clinically psychotic fringe-dwellers so frequently that we have nothing left to say about rage filled murder on the grand scale.

And when we do have something to say about the insanity around us, the pushback is immediate and unrelenting. The NRA has rebuked the American College of Physicians for calling for gun control measures in response to what they see as a public health crisis.

The NRA tweeted,“Someone should tell self-important anti gun doctors to stay in their lane.”  The someone in this case is the NRA, passively but entirely aggressively, telling doctors to shut up about guns.

The physicians went way over the line, apparently, in suggesting that those carrying out domestic violence might not be permitted to own guns, that background checks be extended to all sales of guns, and that we might consider legislation banning 3-D printed guns.  Dr. Esther Choo puts it simply, “We are not anti-gun; we are anti-bullet holes in our patients.”  Doctors who described themselves as “gut punched” by the NRA have responded with #ThisIsMyLane, and are increasingly frustrated by the NRA’s relentless opposition to research on gun violence.

I am particularly struck by the tone of the NRA tweet; it’s snarky, mean-spirited, and dismissive, and it’s not from a single disgruntled passive aggressive knowledge phobic yahoo; the message comes from a non-profit organization which presents itself as, “Freedom’s Safest Place” and which holds gun safety as a cardinal virtue.

Just as we have waffled our way to the brink of irreversible climate disaster, we’re teetering on the edge of even greater violence as hate crimes increase exponentially and the wide-spread availability of terrifyingly powerful weaponry is more common.

We have a crisis right now.  The reaction to the call for open discussion from the Trump wing of the Republican Party , however, is extreme and divisive.  There is a reactionary scoreboard somewhere that counts every barbed insult, every dismissive act of graceless bullying, as a kind of triumph.  Fake news wins by calling honest reporting fake news.  We are living in a schoolyard dominated by bullies whose mode of expression is often, “…is not!” or “that’s stupid”.

Points on the scoreboard.

Meanwhile, there are millions of guns out there, some of which will be used in domestic violence, some by children, some by madmen.  We can’t get them back, and the slightest intimation that more stringent gun laws might be in the offing is guaranteed to boost the sales of guns and ammo.

We have a problem.

Other nations know violence, of course; the cartels kill, maniacal dictators kill, contending armies in war zones kill.  The United States is not the most dangerous nation in the world.  Syria, Afghanistan, and South Sudan are the three most dangerous, followed by the usual constellation of beleaguered states – Iraq, Yemen, Libya, Lebanon, Israel, Palestine, Colombia, Venezuela..  There are forty-one nations that experience violent death more frequently than the United States.  The U.S. is nestled between Myanmar and Armenia, these three followed by El Salvador, Guatemala, China, Brazil, Rwanda, Uganda, and Jordan and the other one hundred and twenty nations less likely to present its citizens a violent death.

The United States of America is more violent than three-quarters of established nation states.  If we still had a functioning Department of State, we would be cautioned against visiting … us.

2 thoughts on “Red State, Blue State, Who Shot Who State?”