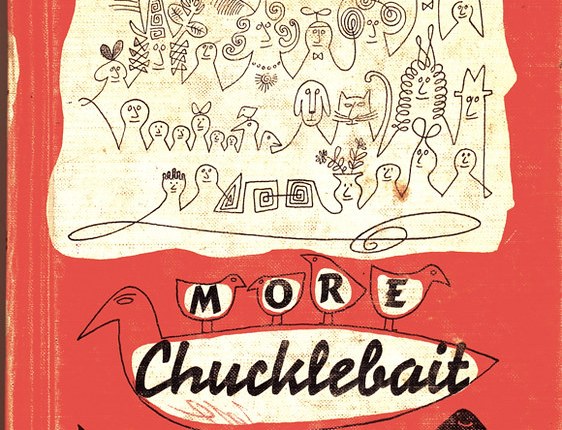 I have no idea how the book arrived or how it happened to find its place of honor at the top of the pile of books to be read as soon as the manuscript I’d been working on had been sent out to publishers and agents in order to receive the traditional and entirely expected silent treatment.  The last proof finally read, the format finally corrected, the cover designed, the time had come to take a book from the pile, a leap of faith too long postponed.  I “read” two or three books a week, generally listening to one and calling the others up on my e-reader.  The pile contains actual hardbound and paperback books, for the most part books that are not newly published or currently admired.  Some are books I’ve meant to read, some books I look forward to reading again, and some, like the book I have just finished, wander in without invitation, hogging access to the many books I’ve been aching to read.

The title of the book is More Chucklebait: Funny Stories for Everyone.  Edited by Margaret C. Scoggins and published by Alfred A. Knopf under the impression of Borzoi Books in 1949, this copy of More Chucklebait is in good condition and features illustrations by Saul Steinberg.  One assumes that Chucklebait: Funny Stories for Everyone, the first collection, was so warmly received that Knopf contacted Ms. Scoggins begging for yet another collection of funny stories for everyone.  The pages of the New York Times sang out with glee when this collection appeared, unreservedly extolling Ms. Scoggins’ collection.  “There is no finer gift than laughter and Margaret Scoggins has given generously of it!”

According to Alice Fedder’s review, this collection is even more generous than the first, presenting twenty-two stories ostensibly baiting us into helpless chuckling whereas the first book offered only twenty.  Ms. Fedder also notes that although the book is primarily intended for teenagers, the book is “for all who are young in spirit.”

So many questions and a few reflections.

I was a teenager who combed library shelves looking for books that offered humorous stories.  I read James Thurber, Robert Benchley, PG Wodehouse, O. Henry, Mark Twain, Ring Lardner, Max Shulman, and Jack Douglas, whose two collections, Never Trust a Naked Bus Driver and My Brother Was an Only Child were, with Bob Newhart or Shelly Berman’s routines and Spike Jones in Stereo’s send up of horror movies, the unfortunate and permanent influences on my own sense of humor.  OK, throw in MAD Magazine and The Pirates of Penzance, a combo too rarely acknowledged as formative experiences.

The which is to say, despite the inclusion of stories that raised nary a chuckle in my youth or in this reading, Ms. Scoggins’ collection has merit, particularly in the inclusion of Charles Dickens and Jane Austen, whose voices I could not properly appreciate until I had moved past Spike Jones.  I’ve written elsewhere of Colin Firth’s role in restoring Pride and Prejudice to its proper place as a novel to treasure (his wet shirt moment was a show stopper in 1995!), but even the toughest case in my lit classes understood that Mr. Collins’ proposal to Lizzy Bennet is a masterpiece of comic prose.  Similarly, both Nicholas Nickleby and The Pickwick Papers make me giddy with delight.  So much more than chucklebait!

So, the question of chuckling now becomes necessary.  I can’t remember my last chuckle, and it is in that statement that the nature of chuckling is made clear.  Recorded laugh tracks chuckle, sit coms elicit an occasional chuckle, a viral meme summons a wisp of chuckle.

Humor is a slippery thing in the best of circumstances, and I would contend that we are not living in the best of circumstances.  Roaring laughter is less common in our household these days; even the lowly chuckle is hardly heard.  My three children with three separate senses of humor can make me weep with laughter, but we are separated in this pandemic and so have to make do with virtual humor.

Even in the  most trying of times, Humor 101, however, consistently points to three scientifically observed sources of humor: Incongruity, superiority, and relief.  Carrying clipboards and wearing lab coats, these pundits reduce all laughter to these three states, none of which strike me as likely to elicit even a chuckle.  We expect one outcome, another arrives, zut alors, we laugh.  You are stupid;  I am not.  We laugh.  Children are trapped in a burning automobile, one of them farts, we laugh.  Or so, science would have it.

I should quickly note that I found this parsing of humor in the same article that explained why we can’t tickle ourselves.  Stick with me here because theory busting is dangerous work, just ask Galileo.  Resolutely ignoring my concern that scientists are working on this question rather than finding the vaccine I need to enter the world again, I’m immediately pulled into what seems the obvious flaw in the same scientist’s opus on humor.  We can’t tickle ourselves, this theory contends, because laughter elicited by tickling depends upon two key elements – surprise and tension.

Fella in a hockey mask holding a chain saw jumps out from my closet.  No lack of surprise and tension there, and yet, somehow, I am not tickled.  The mask is a Mickey Mouse mask, and thus incongruous.  Not laughing.  I see that the electric cord from the chain saw is not plugged in.  Not too swift, pal. Still not laughing.  Finally, the saw wielding closet leaper reveals herself to be my girlfriend, just kidding around.  Yoks galore?  Not so much.

Ms. Scoggins is far more brave than I.  No way would I announce that the work I produce is funny.  It is funny, but nothing is less likely to allow a reader to find it funny than to be told it’s funny.  An author can get away with describing work as terrifying or romantic.  “You’ll love this book.  It’s really scary.”  Yes, there are expectations in working with a genre, but readers generally withhold judgment until they’ve spent some time with the book.  A book that’s touted as “funny” better have the reader on the floor by page two or all is lost.

I’ll close with a quotation from Mr. Popper Gets a Penguin, the final story in Ms. Scoggins’ anthology.  “Ork, said the penguin.  Or perhaps it was the service man.”