In a recent interview, an expert on choice warned that although we demand an unlimited array of choices in every sector of our existence, wading through them all can be exhausting.  Just to put that into perspective, it would take eight months of non-stop viewing to watch everything NEW on Netflix this year, which may sound like an appropriate challenge to some, and if so, go for it, but for the rest of us, some parameters of choice are helpful.

Lots of binging advice is out there, and those recommendations are useful for the most part, but they tend to coalesce around generally fairly widely viewed options.  This guide opens doors which have been opened less frequently with the expectation that some will cause the reader to tingle in anticipation and some to shudder.

I Like Sketch Comedy, But I’d Rather Not Have The Horrible Reality of My Life Today Thrown In My Face Again This Week

A tribute to SCTV, the Canadian comedy universe that aired from 1976 to 1984 will be airing on Netflix in May.  Directed by Martin Scorsese,

the collection of clips and interviews with cast members can only whet the appetite for the sustained comedic genius of Toronto’s Second City actors, including John Candy, Martin Short, Eugene Levy, Andrea Martin, and Joe Flaherty (pictured here) as well as the “Hoser” humor of “The Great White North” featuring Rick Moranis and Dave Thomas.

Jimmy Kimmell hosts and an appreciative audience responds to the clips and commentary, but, folks, this is only the gateway enticement to a world that defies description.

The photo above includes Martin Short’s character, Ed Grimley, later teleported to SNL, but the episodes of particular note begin with SCTV’s Monster Chiller Horror Theater, hosted by Joe Flaherty’s Count Floyd.  Those who have not seen John Candy at the top of his game as Doctor Tongue ought to watch the entire run of Monster Chiller Horror Theater.  A quick jog through the titles only hints at the treasures that await:

I Really Like The Mind Bending Shows That Warm The Heart But The Next Season Of Russian Doll Hasn’t Appeared Yet … Oh … And It Could Be Set In Toronto, That’s OK, Even If This List Turns Out To Be Pretty Canadian

Being Erica – totally Toronto, and if you are ok with therapeutic time travel a pretty nifty way to combine second chance do-overs with tangling up fate, the present, the past, and dating.

Erica is a moderate mess, 32 years old and overqualified for the lousy job from which she is fired in the first episode.  So far, so what, but as she has a nut allergy, the plot thickens when she drinks a cup of hazelnut coffee, ordinarily NOT the magical whatsit that carries an adventure off to Fillory, Narnia, or Oz.  In Erica’s case, screwed up personal life, professional life, family life have all been sparking like thunderclouds waiting for Erica to be hospitalized where an uninvited counselor, Dr. Tom hears an account of her dilemmas and offers to help.  When she finally hits bottom and crawls into Dr. Tom’s office, he asks her to list a lifetime of regrets.  He picks the 1992 Fall Formal as her first time trip, allowing her to return to the humiliation of having gone full-vomit after binge drinking in high school, losing her boyfriend and beginning the slide of shame from which she has not recovered. We and Erica assume she’s just going to make a few good decisions, erase the legacy of shame, and return to a world in which the unsullied Erica might have thrived.  It will come as no surprise that time travel doesn’t work that way. The lessons she (and we) learn are more complicated.

Bunches of them, but the next option offers the rare opportunity to combine the occasionally venal, always absorbing life behind the scenes ala Waiting For Guffman with some surprisingly 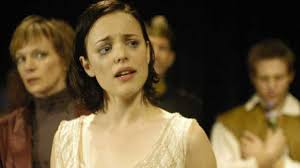 effective performances of  Hamlet, Romeo and Juliet, Macbeth, and King Lear.  Rachel McAdams (left) is the ingenue in the first season, replaced in the second and third by Joanne Kelly.

Mark McKinney of Kids In The Hall, playwright and actress Susan Coyne, and Comedian Bob Martin created this excruciatingly wonderful account of three seasons in the life of the New Burbage Festival, a down-at-the-heels Shakespearean repertory company.  The cast of characters includes every sort of theatrical type, exercises in boundless egotism, directorial choices that defy description (A Romeo and Juliet in which the actors do not touch), and a fumbling executive director who fancies himself a musical comedy star.  Three wonderful seasons.

I Like British Humor, But British Situation Comedies Are As Lame As The American Versions 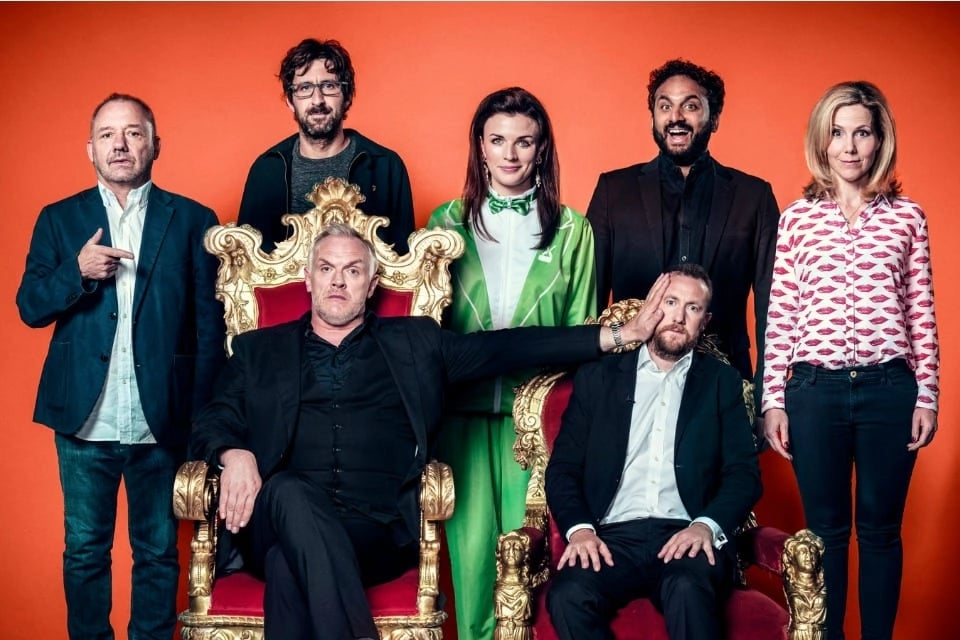 Taskmaster, described as “Clever and Stupid in Equal Measure” is a game show of sorts.  Host Greg Davis (Seated on throne) and flat-affected adjudicator Alex Horne, the show’s creator (Taking punishment on right) set tasks that comedians must complete in order to win the game/season/nothing?  The completion of tasks often strains credulity as in “Do something that looks impressive in an hour” which yielded Romesh Ronganathan’s short film classic “Tree Wizard”.  Other tasks (Knock all the rubber ducks to the ground) was widely hailed as “Stupid, stupid fun”

And what more can we ask of fine television after all?

If I hear Dick Wolf’s “Dun Dun” sound effect one more time, I will personally carry out a crime to be solved on Law and Order, but I like gritty police procedurals.

OMG, nothing like this anywhere on American television.  Turn on the captions as this procedural is set in Manchester, and for all I know, the accents are accurate, certainly indecipherable at times.There are a number of extraordinary qualities to the show, the first of which is the indelible cast of characters, many of whom are pictured here.  Detective Inspector (DI) Vivienne Deering (Holding the badge above) runs a division of the Manchester Metropolitan Police with blunt (more than occasionally obscene) tough love and good humor.  She and the several female detectives that make up this force are clever, tough, kind, and eminently competent.  This is definitely NOT a jiggle and bend Bay Watch company of kewpie dolls.  Imagine buddy cops who are smart, complicated, and completely developed characters.  The men on the show are as compelling, including a forensic specialist who may be among the most curiously effective odd characters to hoist a corpse.  Each season presents a complex of criminal and personal activity resolved for the most part by the season’s end, although as is true of the best of series procedurals, actions in one season have consequences in the next.

You said before that too many choices makes our heads hurt.  SO, Is that it?

WIRE IN THE BLOOD – CRIMINAL PROFILING

THE OA – STILL AROUND – DIVE INTO SEASON TWO

BETTER OFF TED – YOU MISSED IT?  REALLY?