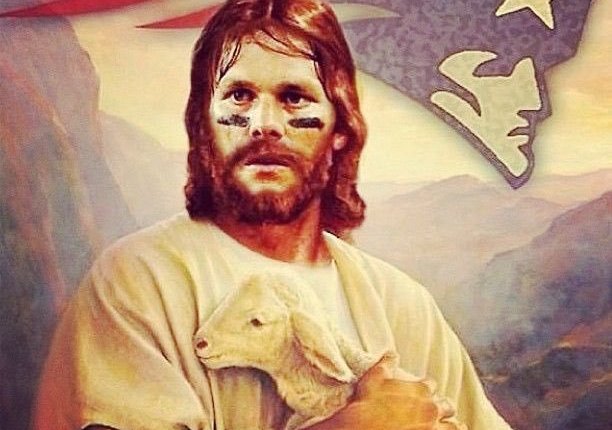 His Holiness will see you now, but, please, only for a few moments.

Yes, of course.Thank you.  Uh, I brought Francis a …

I’m sorry, your business with His Holiness?

Well, we figured he’s the guy to see about getting Brady his sainthood early, you know, before he checks out.

Before he retires.  Like in eight or nine years.

It should be a snap.  We’ve been reading up on it, and the miracle thing is pretty clear.

From what my wife found out, Brady moves from Venerable to Saint when we present the miracles and the Pope drops the hammer.

Are you suggesting that this Father Brady be canonized?  If so, the process begins …

You want to propose the canonization of a goat?

And he performs miracles?

Does he perform miracles?  Is the Pope … never mind.  Sure, miracles.

Water to wine, I suppose, loaves and fishes.

Fishes?  What?  No,  and not just miracles; he’s been martyred.

I’m sure I should know what that means.

It means Goodell and the whole league had it in for him … and the Pats.

Certainly.  According to Giselle… heheheh.

OK, let’s start with the 92.9 completion percentage in the 2007 playoff with the Jaguars.

This Brady was more than 90 percent eaten by jaguars?

Urlacher’s ready to rip him a new one on the 20, and Brady, Brady jukes him.  Jukes Urlacher!

Ok, maybe not miracles, exactly, but 2001, Drew Bledsoe is the franchise quarterback, Belichick’s second season, Pats 0-2, Mo Lewis out of nowhere, not only hits Bledsoe, he puts him in the hospital his chest filled with blood …

So, Brady goes in, the Pats go from 0-2 to the Super Bowl.  Against the Rams.  Greatest Show on Turf.  Miracle, right?

Yeah, but, listen.  even Madden shut up when Brady takes the ball with 1:21 on the clock, starting at their own 17, no time outs, tied at 17, smart money said go to overtime, but no, Brady takes ’em down to the Ram’s 30 in 5 plays, Vinatieri nails it and second-string quarterback carries the Pats on his back to win Super Bowl XXXVI.

You mean a Legion of Doom, apocalyptic visitation, the horsemen?

No, Boom.  Boom.  The Seahawks hadn’t give up more than 7 points in the fourth quarter all season, then Brady drops 14 leaving room for Butler.

No, ok, no question about this one.  Pats down to the Falcons 28-3.  third quarter, Super Bowl trophy definitely not going back to Foxboro …

Down by 25 points and Brady has to pick up a long third down running the ball, himself,  start of the fourth quarter, and don’t forget, he’s been suspended for four games, his mom is fighting cancer, he’s the guy who barely got the start at Michigan, picked up by the Pats as the 199th pick in the draft, this guy picks up 19 in the fourth quarter and 6 in overtime.  Game over.  Good night, Falcons, enjoy the trip home from Houston.

This Brady is still alive?

Yeah, sure.  He’s got to play the Eagles in a couple of weeks.

We can’t … well, we don’t actually do anything.  Once deceased, the Servant’s life is brought to the Congregation for the Causes of Saints, and then…

What?  No, Rome.  Rome.  I’m afraid the Pontiff will not able to hear your petition.

At the very least …

Yeah, the way things are going, that might not happen.

Everyone deals with the inevitable process of aging.

Have you been listening to me?  That’s another miracle.

I’m sorry, but I do have one question.

Can we keep the sweatshirt?