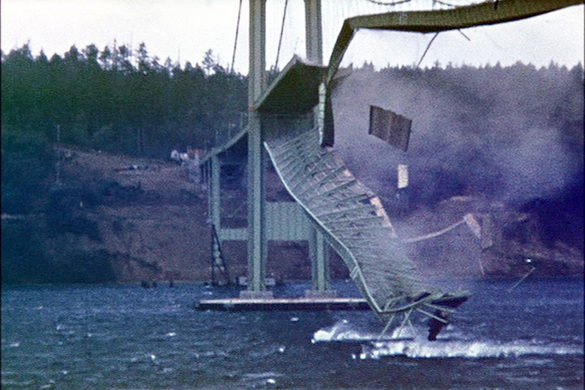 I had the dream again last night.

I’m in a car, a convertible, driving at high speed.  Where I am or where I am going is not important.  What is important is that I hit a ramp and start to climb.  I’m on bridge over water.  The pitch of this bridge is unspeakably steep.  It seems I am climbing straight up to a point at which the bridge disappears.  I will sail out and out and down.

I always wake at that point, gasping and choking.  Sailing from the end of the bridge is terrifying, but so too is the compulsion to yank the car to the left or right, bust through the puny guard rails, and send myself into the void before I reach the horizon.

I’m not fond of this dream, but it’s one from which I can awaken.  The actual driving over a bridge is a waking nightmare for me.  I do it, when I can find no other way to negotiate a trip, but the various stages of panic make the ordeal disquieting.  In the early stages I can see the sweep, the arc, of the bridge, and if I forget to look down, I can see the river or train tracks or highway below.  The setting is relatively unimportant, although bridges over wide spans of water tend to rise more precipitously and stretch for a longer distance than the relatively compact highway overpass.  I have to pull my vision back to the middle of the bridge.  As I gain height, I concentrate in seeing only a thin strip of roadway in front of me.  If I’m in the outside lane, I feel an obligation to slew into and over the guard rail; if I’m in the inner lane, there’s something seductive about the stream of oncoming traffic.

It never occurs to me to swerve into the oncoming lane in any other circumstance; I’m perfectly content to keep to my own space.  Perhaps other gephyrophobes have better language to describe what I experience as claustrophobia at high speed; it’s as if I am smothered by fear and can only break away by breaking away.  Sounds bad, you say, and I agree, but then traffic comes to a halt, and I am trapped mid-bridge, now compelled to look about me to assess the relative impact of my fall, stuck with thousands of pounds of automobiles on cantilevered concrete intended to bear the weight of far fewer standing cars.

“What?  Are you afraid of being blown off the bridge by a gust of wind?”  Yes.  “Are you afraid the bridge might collapse?” Duh. Of course I’m afraid of both those situations.  Who wouldn’t be?  Ask any number of intrepid bridge drivers, “How would you feel if this bridge collapsed?”  I doubt that many shrug and say, “Hey, it happens.”

Gephhyrophobia is described is an anxiety disorder, which is like saying that cannibalism is an eating disorder.  Anxiety is a cold chill down the spine; panic is all the air sucked out of the universe.  It’s not just bridges, although bridges always bring panic; I can feel the same powerful waves of fear on a boat in the middle of an expanse of water or looking out of the window in a tall building.  Doesn’t have to be that tall, actually.

What seems clear is that I am the living embodiment of Franklin D. Roosevelt’s oft repeated axiom, “The only thing to fear is fear itself,” which may or not be true for those facing real and immediate danger but is absolutely true for me in the midst of situations that are not threatening for most people.  I am overwhelmed with the fear that fear will prompt me to do the unthinkable, veer off the bridge, step off the building, jump into the ocean.

I don’t want to do any of these things; I don’t think about them until I am on a bridge, or near a window on the 50th floor, or looking at the horizon on a boat.  I absolutely understand a phobic response to sharp knives; I’m not afraid that I’ll stab myself, but I would get it if someone described their panic as they thought of doing just that.

Let’s get off the ledge for a minute and take a look at this fear of fear.  In my case, watching a movie in which a driver races across a long bridge is enough to make me swallow hard.  I’m ok, unless the director leaves the car and driver at the top of a swaying bridge, plugging in long shots from the bridge to water far, far below.  I’m suggestible and easily emotionally manipulated, but the bridge thing is more intense than the trapped in a submarine or diving airplane sequence, either of which should be about as nasty as conditions could be.

Suggestibility is another way of saying that I become fearful in the absence of an appropriately fearful stimulus; I’m afraid before I have reason to be afraid.  I’m suggesting a larger societal implication here, but the point to be made in advance of wider hypothesis is that my fear is not mitigated by reason or comforted by experience; I can’t be reassured out of panic.

To finish up with the bridge as metaphor, a nation may not be able to escape from undue anxiety until our feet are on the ground; there’s not much to talk about as we race out of control  trying to outrun fear.

Meanwhile, I’ve found a way to get to my destination without crossing a bridge.  It adds a half hour to the trip, but I’ll arrive chipper and unscarred, certainly worth a few extra minutes of back road navigation.  On my next holiday, will I be driving the hairpin four mile Megler Bridge from Astoria to Point Ellice, or the twenty-four mile Lake Pontchartrain Causeway, even though that bridge is not terribly high, or the Chesapeake Bay Bridge, which is two hundred feet above the water for more than four miles?